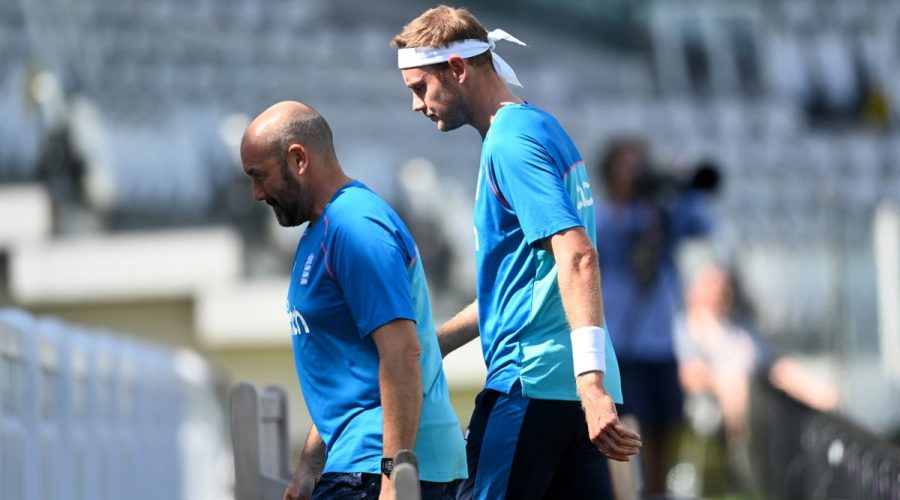 Stuart Broad leaves the warm-up after an injury

Stuart Broad has been ruled out of England’s remaining four Test matches with India after sustaining a calf injury during training.

Broad picked up the injury during a warm-up session at Lord’s on Tuesday, and an MRI scan on Wednesday revealed a tear to his right calf muscle which will keep him out of action for several weeks.

The news could potentially get worse for England ahead of the second Test, which begins on Thursday, after James Anderson sat out Wednesday’s net session with a tight quadricep.

Broad and Anderson are England’s leading all-time wicket-takers with 524 and 621 respective and their absence will be keenly felt after the first Test of the five-match series was drawn at Trent Bridge. England have not lined up for a Test match with neither Broad nor Anderson since October 2016.

England have called up Lancashire seamer Saqib Mahmood as cover for Broad, while Ollie Robinson, Mark Wood and Craig Overton remain options to bring into the team, with Wood and Overton expected to get the go ahead to play if Anderson joins Broad on the sidelines.

Haseeb Hameed could come into the first XI with Zak Crawley the most likely to be dropped, while Moeen Ali has been called up and is set to play as a spin bowling all-rounder.