Off-spinner Molly Strano was denied a history-making moment on a day the Melbourne Renegades fell to another loss and face an enormous challenge to rebound in a cross-town Women's Big Bash League derby on Sunday.

The Renegades' batting woes were again on full display against the Perth Scorchers on Saturday when they could muster only a modest 3-122 at the Sydney Showground. In reply, the Scorchers dashed to a nine-wicket victory with 31 balls remaining, leaving their opponents with only one win and six defeats. 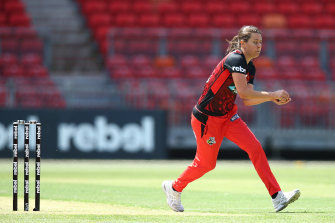 The first derby between the Renegades and Stars was cut short due to poor weather but Team Red will need to produce something special if they are to upset Meg Lanning's side, which is looking to rubber stamp a finals berth.

Renegades captain Amy Satterthwaite capitalised on a rare back foot no-ball to make an unbeaten 48 off 56 deliveries against the Scorchers but the Renegades could not score quickly late in their innings despite a reshuffled line up. 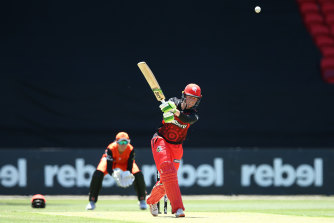 Amy Satterthwaite of the Renegades bats during the WBBL match between the Perth Scorchers and the Melbourne Renegades.Credit:Jason McCawley

On 15, the left-handed Satterthwaite was bowled from around the wicket attempting to clip fast bowler Piepa Cleary through the on side but won a reprieve. After a long video review, it was adjudged Cleary had crossed the return crease with her back foot, this being a no-ball. Satterthwaite, who had almost crossed the boundary line on leaving the field, returned to the battle.

"That doesn't happen too often – we made the most of it," batting partner Sophie Molineux (39 off 38) said.

Satterthwaite and Molineux shared in a 76-run stand – the Renegades' best of the season – but they were unable to turbocharge the run rate. Molineux was caught at mid off looking to accelerate but the Renegades could manage only two boundaries in the final five overs – both coming in the 20th over.

"You need to score runs and we haven't quite hit the mark this season," Molineux said. 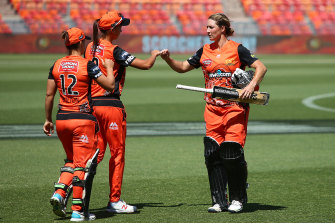 South African star Lizelle Lee was dropped from opening to No.4 but again failed to have an impact, falling lbw for 12 having attempted a ramp shot. In seven innings, her top score is only 38.

The Renegades needed to quickly dismantle the star opening combination of Sophie Devine (77 off 54 with three sixes) and Beth Mooney (nine off seven). The latter, the leading run-scorer in this tournament, began well but was deceived by a skidding delivery off Molineux's left-arm finger spin.

Power hitter Devine has been in excellent touch but the Renegades – and Strano – were left to rue a grassed opportunity when Devine was on 15. Strano, needing one wicket to become the first WBBL cricketer to 100, thought she had that milestone when Devine top-edged a sweep but Rosemary Mair spilt the chance running around from the square leg. 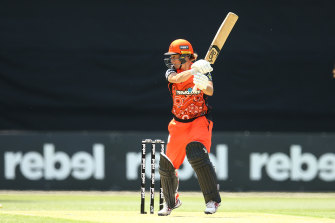 Sophie Devine in action for the Scorchers. Credit:Jason McCawley

The flashing Zing bails were again in the spotlight when an inside edge off Chloe Piparo clipped the stumps but the bails were not completely dislodged.

"It has happened so many times, nothing surprises me anymore," Lee, the Renegades wicketkeeper, lamented.