Cricket's hangover from Cape Town has now all but cleared, with Steve Smith free to captain Australia again if called upon.

With the world's focus on the devastating coronavirus pandemic, Smith's two-year leadership ban from the sandpaper ball-tampering scandal ended quietly on Sunday morning. 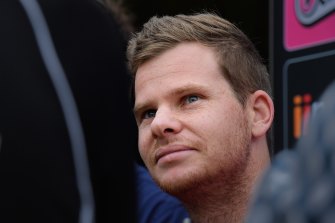 Steve Smith’s captaincy ban is over, but cricket, like most sports, are in limbo.Credit:Kate Geraghty

David Warner's leadership ban is career-long, meaning there are no more terms left to expire from the sanctions imposed following the sport's darkest day.

It comes after the scandal cost Cricket Australia their men's captain, vice-captain, opening batsman (suspended) and coach (resigned) before the CEO and some members of the executive departed.

Smith and Warner have since returned to their sparkling best on the international scene, while Cameron Bancroft was afforded two chances in the Ashes before being dropped.

Justin Langer has found success replacing Darren Lehmann as coach, while Kevin Roberts has settled in as chief executive and the sport again looks settled.

While Smith's ban has been lifted, his time is now being spent in his home gym, playing guitar and going on 10-kilometre runs with the sporting world in limbo due to coronavirus.

Australian players were meant to fly from a New Zealand tour to the Indian Premier League this week, but it's now unclear when they'll next appear on a cricket field.

Mid-year tours of Bangladesh and England must be in major doubt and beyond them the Twenty20 World Cup and home Test series against India are scheduled for next summer.

"It's obviously not looking likely [the IPL will go ahead] at the moment," Smith told Nine's Sports Sunday.

"I think there might be some meetings over the next few days to discuss what the go is with it all.

"I'm just trying to stay physically and mentally fit and fresh and, if it goes ahead at some point, then great.

"And, if not, there's plenty going on in the world at the moment. So just play it day by day."

Regardless, it seems unlikely 30-year-old Smith will take over a full-time captaincy role again for Australia in at least the short future.

The superstar batsman has been repeatedly pressed on leadership for the past year, but both he and Langer continue to back Tim Paine and Aaron Finch to stay in their captaincy roles with the national teams.

Paine has helped rebuild the Test team to No.3 in the world, and at age 35 seems intent to play on until at least midway through the next year.

Finch took Australia to the semi-finals of last year's one-day World Cup, and together with Paine combined for an unbeaten home summer across all formats.

When one of the pair do retire, it will likely become a decision between Smith and quick Pat Cummins for who leads Australia next.