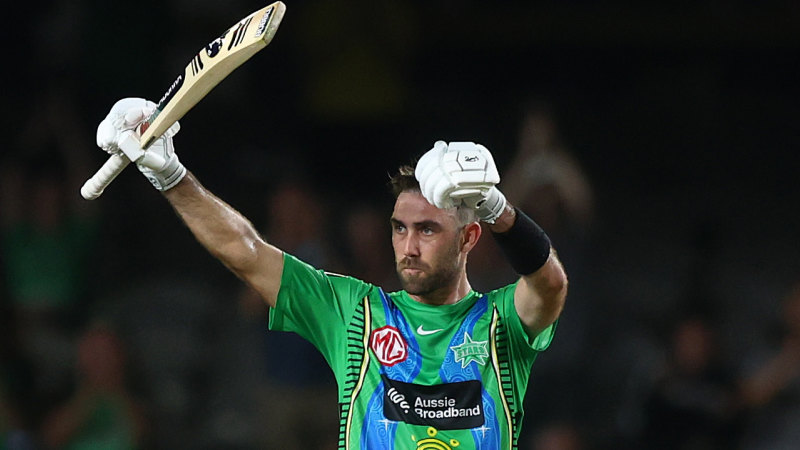 Melbourne Stars captain Glenn Maxwell has returned to form in a big way, leading from the front as his vastly-strengthened team emphatically turned the tables on crosstown rivals the Renegades at Marvel Stadium on Thursday night.

The men in green took out the season’s second Melbourne derby by six wickets, 10 days after fielding five top-up players against the Renegades, as a result of COVID ravaging their squad, and subsequently losing by 50 runs.

But with Joe Clarke, Beau Webster, Joe Burns, Nick Larkin, Sam Rainbird and Adam Zampa back in the line-up, after being forced out of the last derby, it was a very different story this time around as the Stars sealed victory with 33 balls to spare. 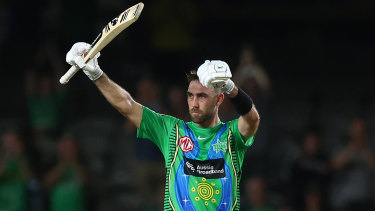 Glenn Maxwell led the way for the Stars in a commanding win over their crosstown rivals.Credit:Getty Images

Maxwell returned to form after four consecutive single-digit scores, smashing 68 not out off 45 balls, his second-best score for the summer, including eight fours and a six, which he cracked off the first ball he faced.

The bonus point result saw the Stars catapult themselves from last place and into the top five, while the Renegades returned to the bottom, where they remain on track for a third wooden spoon in a row.

And given their average score is 102 in their last three games – each of those thumping losses to the Thunder, Sixers and Stars – they’ll be hard to beat for the ignominious achievement with only two games to play.

Two of the Renegades’ three wins this season have come against COVID-decimated Stars and Heat sides, underscoring how poor they’ve been yet again. 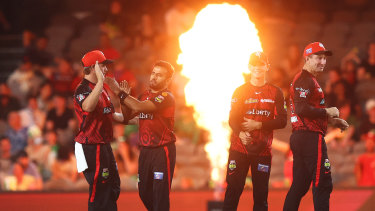 Zahir Khan celebrates with his teammates after snaring the wicket of Beau Webster at Marvel Stadium.Credit:Getty Images

After winning the toss and electing to bat first, the Renegades mixed things up with a batting reshuffle which saw Shaun Marsh open, Nic Maddinson and Mackenzie Harvey promoted to first drop and No.4 respectively, and Aaron Finch slide to No.5. It didn’t work.

Express Stars paceman Haris Rauf (2-28 from four overs), playing his last game after being recalled by his Pakistan Super League team Lahore, started the hosts’ rot in the second over, dismissing Marsh and bowling Maddinson in the space of three balls to reduce the men in red to 2-9.

And after Aaron Finch (45 off 44 balls) and Jake Fraser-McGurk (32 off 39) stabilised things for the Renegades, putting on 51 for the fourth wicket, the Stars’ other import Qais Ahmad (2-15 off four) got the double breakthrough in the 14th over, bowling Fraser-McGurk and then having Sam Harper stumped by Joe Clarke, as the hosts slumped to 5-79.

The Stars’ pressure suffocated the Renegades, who only managed eight fours and one six, which didn’t come until the 18th over, while the visitors racked up 41 dot balls, including 12 from Ahmad, who teamed up superbly with spin twin Adam Zampa (2-18 off four).