Hobart: Stuart Broad claimed the last laugh against David Warner in their celebrated rivalry as Australia overcame the dud hand dealt to them by the pink ball gods to stay on course for a triumphant finish to their Ashes campaign.

On another high octane day which saw 17 wickets fall, England landed three late blows under lights, dismissing Warner, Marnus Labuschagne and Usman Khawaja cheaply. But the hosts are well on top at stumps on the second day after another poor display with the bat by the visitors, who were dismissed for 188. 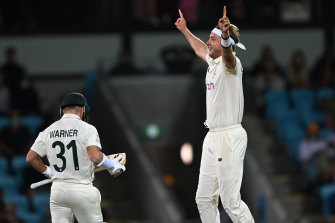 Australia will resume on 3-37, a lead of 152, with a hungry Steve Smith eager to finish off the series with a knock to remember. England believe a target less than 300 is chase-able but they need to do everything right on the third day to restrict Australia.

“That was [some] bloody tough conditions out there, some balls were seaming an absolute mile. I’m sure he’s ready to go tomorrow. He hasn’t scored a hundred this series, tomorrow he’ll be pretty up for it.

“That night session they’re the kind of night sessions you have to be careful of in day/night cricket if you get caught out with the new ball.

“Warm and humid, they do a little bit more as well. It’s a fairly good effort to only be three down in really tough conditions.”

Cummins paid tribute to latecomer Scott Boland, who won the admiration from teammates this time in the unfamiliar role as nightwatchman. The No.11 wore several blows in his 25 balls but was unconquered, as he was earlier in the day in a handy last-wicket stand.

“He got a few singles from the last ball of the over, solid defence, wore a couple on his hands,” Cummins said. “Hopefully from his hard work, the batters can cash in when the wicket’s a bit easier in the day.”

Warner was adamant he could turn the tables on Broad back on home soil this series but his long-time nemesis has claimed the points.

Broad sent Warner off with just his second pair in 91 Tests, both of which have come from his past seven Ashes fixtures.

In the 66 balls he faced from Broad this series, Warner lost his wicket twice for just 25 runs – not quite as one-sided as 2019 when he fell seven times in 104 balls but a victory for the seamer nevertheless. Warner is open for another campaign in England next year though at the age of 36 he cannot be better than a 50-50 prospect to make it that far.

Khawaja needed only two games to ride the ups and downs of Test cricket. He could not get his gloves out of the way of a well-directed bumper from Mark Wood, dismissed for 11 to complete twin failures after twin tons in his comeback game in Sydney. Conditions, though, were not in his favour. 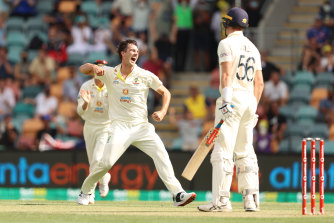 These are only minor losses for Australia, who have the opportunity on Sunday to bat England out of the game on a pitch that is not as spicy as it was on the first afternoon despite the high number of wickets falling.

There was still enough life, though, for the Australia attack to tease out the numerous flaws in England’s frontline batters.

Even with the charity of two non-referrals from faint edges, Australia still made a mess of their opponent, who failed to reach 300 in all nine of their innings.

If either Warner or Khawaja had held on to the snicks from Woakes on zero and five, the door would already be slammed shut. Woakes has done little with the ball but has played some fighting knocks at No.8, this time top-scoring with 36.

Rarely will England have a better opportunity to strike a blow on these shores. Their seamers had first use of a verdant deck, bowled with a new pink ball under lights in Australia’s second innings, and their batters enjoyed the most favourable conditions for batting only to make basic errors.

Ben Stokes could consider himself unfortunate that his rifled cut shot was brilliantly caught by Nathan Lyon, and Dawid Malan was strangled down the leg side but England did not help themselves.

For reasons known only to Rory Burns, the embattled opener opted not to dive for the crease in his comeback game and was run out by a matter of inches after being called through for a hairy single by Zak Crawley.

His lack of urgency belied what is on the line for Burns in this game, earning a rebuke from former Australia captain Ricky Ponting.

England’s dysfunction at the top of the order means they are playing with one hand tied behind their back. They have failed to reach double figures in six of their nine innings. Embarrassingly, Australia’s 10th-wicket partnership is averaging more than England’s opening stand of 12.77. Australia’s openers had a hellish time in 2019 but had Smith to rescue them.

Burns could not even say it was a chance-less duck, surviving after the hosts did not hear a thin edge to Mitchell Starc from the first over of the innings.

Ollie Pope was more composed than the player who was out of his depth in the first two games, but he was lulled into a needless prod from Scott Boland, who was more threatening than his 1-33 suggested.

Cummins made the key breakthroughs for his team, removing Joe Root and Malan in quick succession just as the pair were making inroads into Australia’s total of 303.

It will be of little consolation to Root that his lbw, for 34, broke a run of eight snicks behind the stumps. As captain, Root must wear the brunt of the criticism for his team’s woeful summer but he has performed admirably with the bat in a series dominated by the bowlers on seam-friendly tracks.

January 15, 2022 Сricket Comments Off on ‘Some balls were seaming a mile’: Australia on top despite late blows
NFL News