Travis Head concedes he needs to show he can play more innings of the kind peeled off by Usman Khawaja from the No. 5 spot in Sydney, even as he eyes off a return to Australia’s ODI squad for the first time in three years.

Having recovered from what he described as an asymptomatic bout of COVID-19 after the Melbourne Ashes Test, Head drove to Sydney to return to the team camp during the SCG match, and can be expected to resume his place for the final game in Hobart.

An explosive century from 87 balls to open the Ashes series in Brisbane underlined why the national selectors had chosen Head before Khawaja for a counter-punching role in the middle order, but that is far from the only innings required of a Test batter. 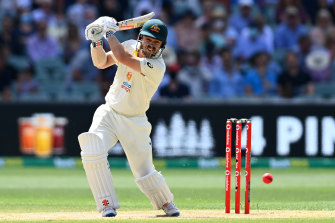 Travis Head is set to return to the Test team in Hobart. Credit:Getty

The multiple gears used by the 35-year-old Khawaja during twin centuries at the SCG, absorbing high-quality spells from the likes of James Anderson and Mark Wood before going on the attack when circumstances suited, were an example for Head to follow.

“I’ve been happy with the way I’ve played, I think I’ve read the conditions well and summed the conditions up and the situation of the game well,” Head said when asked to reflect on his series so far. “That’s what was asked of me at the start of the series.

“I’m under no illusion that the boys at the top of the order have done a fantastic job – to bat behind those boys in that order, they’ve set an amazing platform over the first three Tests, and I was able to capitalise a few times. I knew that from Adelaide it was going to be tough going in Melbourne, Sydney, and I was bracing myself for an opportunity where I needed to play a different way, and that may be in Hobart.

“I know the opportunity will arise in the near future where I’ll have to play a different way, but I’ve been happy with the way I’ve moved, the positive nature I’ve played and when the game’s dictated what’s needed I’ve been able to sum it up well and then perform.“

Australia have three home ODIs scheduled against New Zealand in late January and early February, and while Head admitted he felt a long way from the reckoning for Twenty20 assignments after Aaron Finch’s team lifted the World Cup in the UAE last year, he sees more opportunity in 50-over games.

“Fifty-over cricket is the only other thing on my mind at the moment,” he said. “T20 is probably a fair way off, just where I’ve been at with playing the game, and that’s just being brutally honest in where I’m at. I’ve played well for SA in 50-over games, I’ve been happy to play the format of the game, I’ve missed out a fair bit on white ball cricket the last couple of seasons.

“I haven’t had any conversations [with selectors] other than the start of the year around what was needed, and that was the plain and simple, ‘Go out and get runs and bash the door down’. So, runs are the currency, but it’s been nice to play 50-over cricket for SA and when that opportunity arises I’d love to take that.”

Head averages 28.84 in seven first-class appearances at Bellerive Oval, including an innings of 145 against Tasmania in 2018. Looking ahead to the pink ball Test, he reasoned that there will be both batting and bowling friendly periods over five days.

“What we do know is there’s going to be opportunities for the ball, but there should be some great opportunities with the bat on certain days when if the sun comes out you can see big runs scored there,” he said. “I’m expecting a really good wicket.”

January 10, 2022 Сricket Comments Off on ‘Runs are the currency’: Head braces for tougher grind in Hobart Test
NFL News