A brilliant Ellyse Perry ton and a record-equalling Ashleigh Gardner half century have steered Australia to a commanding 151-run one-day international win against the West Indies to secure the three-game series 2-0 for the tourists.

Perry brought up her second ODI century (112no off 118 balls) while Gardner's brutal 57no helped Australia to 2-308 at Sir Viv Richards Ground. 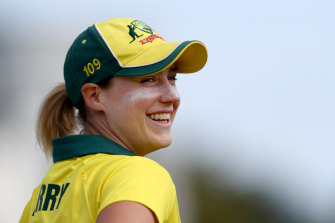 "All in all, especially with Ash at the end there and 'Midge' [Alyssa Healy] at the start there was some really good things throughout both innings and games so far, so it's been really worthwhile for the group and nice to be a part of it."

Australia suffered a setback with captain Meg Lanning ruled out minutes before the toss in Antigua with back spasms.

Vice-captain Rachael Haynes won the toss and elected to bat and she was the first to fall, for 13, bringing Perry to the crease.

Opener Healy reached 58 from just 43 balls before she joined Haynes on the sidelines when she was caught behind.

Perry and Beth Mooney put Australia in the box seat, the duo both posting half centuries before the latter retired due to heat stress when she was on 56.

Australian won the first match of the series by 178 runs with the game three to be played in Antigua on Wednesday (11.30pm AEST).