Tim Paine has accused third umpire Paul Wilson of rushing to overturn a contentious caught behind decision on day three of the Boxing Day Test, claiming the former Test paceman failed to take into account the full evidence before instructing on-field umpire Paul Reiffel to send the Australian captain on his way.

A day on from his second innings dismissal, Paine said the manner of his removal had been "extremely disappointing," stressing that he felt there had been a lack of consistency between that call and one which spared India's Cheteshwar Pujara on day two. 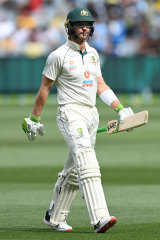 "[It was a] crucial part of the game, felt like I'd been playing pretty well start of this series and felt like if i could get in a partnership with Greeny and add another 50, 100, 120 runs together then the whole game changes. To have it finish like that was extremely disappointing. But yeah, it is what it is."

Asked if he had hit the ball, Paine was adamant.

"No, I think that was pretty clear by my reaction," he said.

In particular, Paine took exception to the fact Indian batsman Pujara had survived a similar call despite the Australians reviewing a 'not out' call on the first ball of day two at the MCG.

"I thought we had a pretty similar example in the first innings with Pujara on the first ball of day two, which sets a precedent, and then it seemed to change," Paine said.

The skipper added that he had spoken to match officials about the issue but that he had not been appeased by the talks. 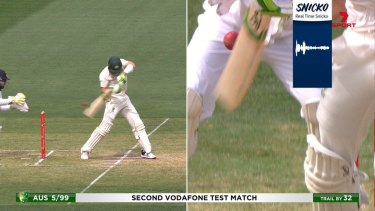 Tim Paine’s dismissal, and the Snicko sound reading that appeared to come after the ball had passed the bat.Credit:Twitter

"I've spoken to them. It wasn't very productive. My concern yesterday was not with the technology. It was with the precedent that was set in the first innings with Pujara and the fact I think the decision was just made too quickly. He didn't look at enough replays to see full evidence that there was probably a gap between bat and ball. The line itself had started before it went past my bat and then it's finished again.

"It was just lots of things that didn't marry up for me. I saw some photos of it. All sorts of things. I just don't think he took the time to look at the evidence. The technology itself I thought was OK."

While there had seemingly been a spike on Snicko after the ball had passed the bat, former leading umpire Simon Taufel told Channel Seven on Monday that this did not necessarily mean there had been an error.

"Light does travel faster than sound … that's why there is that little bit of timing difference," Taufel said.

Paine made headlines in 2019 for his poor record in reviewing calls via DRS, most notably during the thrilling conclusion to the third Ashes Test in England in which Paine’s wastefulness with the system arguably cost Australia victory.