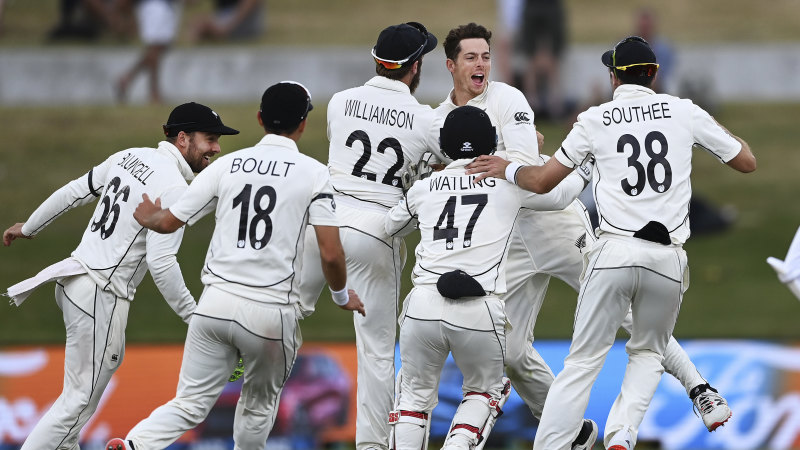 As I was walking into the SCG on Thursday a fan asked me what I thought of the No.1-ranked Test cricket team in the world. Along with her mask, she was wearing an All Blacks T–shirt, a jade tiki and a smirk.

It is painful enough to wear the disappointments of the our national rugby team, but at least we can concede the dominance of New Zealand rugby amid the periodic peaks of the Wallabies. It is of no great surprise when the All Blacks win the Bledisloe Cup, or even the World Cup. 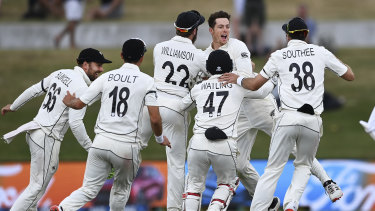 Mitchell Santner and New Zealand celebrate a remarkable win in the first Test against Pakistan.Credit:AP

COVID cancellations and resumptions have brought even more complication to what is designed to be a three-year rolling home-and-away competition. The more you win away from home, the more ranking points you get. The better you play against teams ranked above you, the more points you get.

Which brings us to the newly crowned No.1 team. The rankings after the Boxing Day Tests around the world were: 1. Australia, 2. India, 3. New Zealand and England a distant fourth. With another Kane Williamson double ton instrumental in the innings victory over Pakistan at Christchurch in the new year and Australia’s eight-wicket loss at the MCG, the Black Caps overtook everyone.

New Zealand have a spectacular home record – with one of the best rankings since May 2017; much better than even India – where they have won 13 of their past 16 Tests and lost none. However, they have played only 24 Tests, compared to England’s 45 during the ranking period. India have been 9-0 at home, while New Zealand have lost only one series in that time and that was the 3-0 drubbing to Australia last summer. 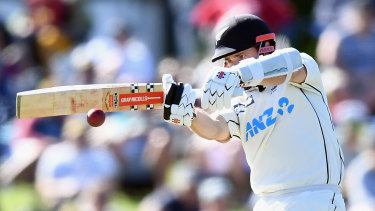 Kane Williamson leads from the front again for New Zealand.Credit:Getty

That series came with high expectations for a close, quality contest, a litmus test of the Kiwis' ambitions and claim to be No.1. It was their best opportunity since the mid-1980s, when Richard Hadlee was in his prime, to beat Australia in a series. Sadly, they were beset by problems from the start with very fast bowler Lockie Ferguson only bowling 11 overs in the first Test, then superstar Williamson succumbing to illness and opening bowler Matt Henry injured in the third Test.

Australia won by big margins with no Test making it to the fifth day. That series loss proved to be the exception for the Kiwis as they have won away 2-1 against Pakistan in the UAE in 2018 and drew 1-1 in Sri Lanka in 2019.

Currently, India are in their seventh away series in the ranking period, so they have been doing more hard yards offshore than New Zealand. If India can win in Sydney and/or Brisbane they will go top of the rankings. If Australia win, they will regain the mace.

It would surprise few to know that the best ranking and record when the ICC retrospectively assessed teams back to 1952 was the West Indies between 1979 and 1988.

The statistics and formula might be the theory that forms the structure, but the nuts and bolts of New Zealand's ascension come from a group of underrated and over-performing players. Their bowling attack has been providing plenty of ammunition. Trent Boult (taking his scalps at 28), Neil Wagner (219 wickets at 26) and Tim Southee (302 wickets at 29) have had outstanding careers.

The significantly tall discovery has been all-rounder Kyle Jamieson, with his first 36 Test wickets costing only 13.27 a piece and averaging more than 50 with the bat.

Williamson has averaged more than Steve Smith and Virat Kohli during the Test championship period with 64.68, while the unfashionable Henry Nicholls (51.50) and lefty Tom Latham (47.63) have given great support. The top six all average over 38 and most of that in home, bowler-friendly conditions. Brendon McCullum reckons BJ Watling is the best wicketkeeper-batsmen in the world. The argument has veracity. Williamson may well be the best skipper.

The skewed home roster has been a boon for the Kiwis, but you still have to beat the other top teams and they have done that against India, Pakistan and England. Australia have not played a Test series across the ditch since 2016, when they won 2-0.

The pot of gold at the end of this particular rainbow is the Test championship final, to be contested at Lord's in June between the top two ranked teams. It’s a nice theory, but there will be many missteps and stumbles before that may become a reality. Getting millions of people vaccinated would be a good first stride.

India and Australia will be fighting to be the two teams in that final and, given the margins are small, every win, loss and draw will have an impact on the table. Both teams might not have the championship front of mind as they battle at the SCG, but I reckon the Black Caps sitting back at home will be watching earnestly, wishing for a Moore Park washout and hoping to collect $1 million and the mace on April 1.

We are hoping that the Wallabies can return the favour one day.