Wellington: Tom Latham and Colin de Grandhomme ensured New Zealand did not waste a solid foundation from their top order to beat India by five wickets in the third and final one-day international at Bay Oval in Mt Maunganui on Tuesday.

Latham scored a composed 32 not out while de Grandhomme's aggressive 21-ball half-century took New Zealand to 5-300 with 17 balls to spare after KL Rahul's fourth ODI hundred had guided India to 7-296. 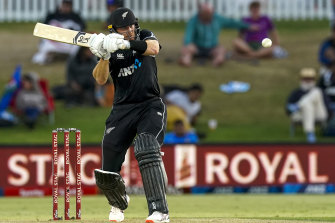 Martin Guptill plays a shot during the ODI between India and New Zealand at Bay Oval, Tauranga.Credit:AP

New Zealand had wrapped up the three-match series after a four-wicket win in Hamilton and 22-run victory in Auckland, making some amends for India's 5-0 sweep of the Twenty20 series.

Martin Guptill (66) and Henry Nicholls had given New Zealand a perfect platform with a 106-run opening stand to put their side on course for an easy victory.

Yuzvendra Chahal, however, produced a sumptuous legbreak that pitched on leg and turned to hit the off stump to dismiss Guptill when it looked as if he was set to score his 17th ODI century.

Chahal also dismissed captain Kane Williamson for 22 and India dragged themselves back into the match when they dismissed Ross Taylor (12) and Nicholls (80) within the space of six balls and reduced the hosts to 4-189 in the 33rd over.

Latham and De Grandhomme (58 not out), however, complemented each other perfectly to put on 80 runs in 46 deliveries and guide the hosts to a comfortable win in the end.

Hamish Bennett was the pick of the Black Caps bowlers taking 4-64 off his 10 overs.

Rahul became only the second India wicketkeeper to make a ton outside Asia – following on from Rahul Dravid in 1999.

Rahul also topped the run scoring for India in the five-match Twenty20 series with 224 runs at 56 and his form kept exciting young wicketkeeper Rishabh Pant out of the team for both formats.

The first match of their two-test series starts at Wellington's Basin Reserve on February 21.