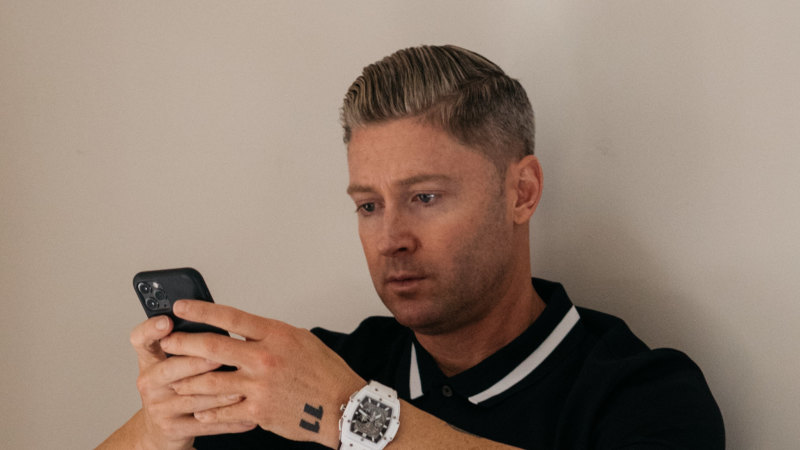 The scriptwriters of Kath and Kim couldn’t have written it better.

Alas, life often imitates art — or Instagram — when it comes to Clarke, a champion cricketer who was always so much more.

Since his early days in the baggy green, he has courted celebrity yet been equally riled by the attention it brings.

Add a two-minute video revealing an expletive-laden argument with girlfriend and Stefanovic’s sister-in-law, Jade Yarbrough, who accuses him of sleeping with former girlfriend Pip Edwards before slapping him across the face, to the long list of tabloid scandals in which he’s been embroiled.

In March 2010, he abandoned a tour of New Zealand while vice-captain to return to Sydney and end his engagement to Lara Bingle. That’s something Australian cricket has never seen before and is unlikely to see again. 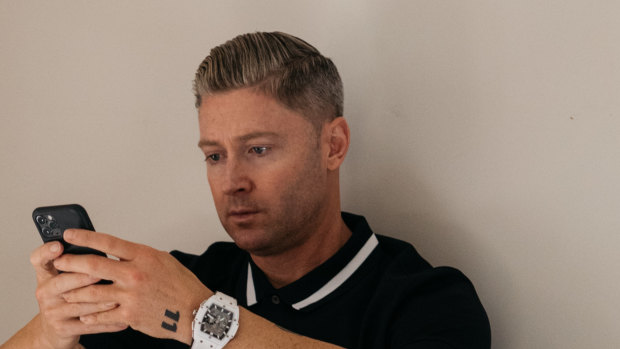 A year earlier, he was involved in an infamous SCG dressing-room altercation with teammate Simon Katich, who grabbed him by the throat and held him against a wall. It created a divide in the Australian team that lasted until his retirement.

Your humble correspondent broke that story and what surprised the most was just how prepared Cricket Australia was for it. Then CA public affairs manager Peter Young came back to me with statements from both players within 20 minutes of my inquiry.

For most of his career, Clarke found it difficult to accept blame, for anything. You can attribute that to being in the bubble of the Australian cricket team for most of his adult life.

But he took the highest ground possible — if there is such a thing — with this latest indignity by releasing a statement on Wednesday night accepting all responsibility. 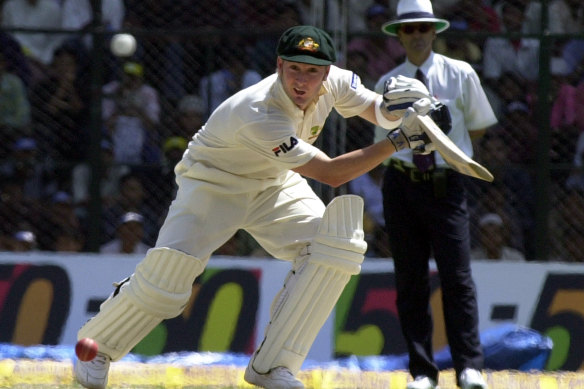 Michael Clarke en route to a century in his first Test in India in 2004.Credit:AP

“I am shattered that because of my actions I’ve drawn women of class and integrity, and my mates, into this situation,” he told News Corp. “I own this fully and am the only one at fault.”

Clarke is on annual leave from his hosting gig on Sky Racing’s Big Sports Breakfast but returns on Monday having only recently extended his deal for one year.

He is expected to address the story, but it is unclear how. What he can guarantee is a merciless barrage of texts and calls from listeners on the subject.

Two weeks later, he flies to the subcontinent to call the first two Tests of Australia’s series against India before returning later in the month for the annual BSB Lunch, which will be held at The Winx Stand at Randwick Racecourse. They are always boozy affairs and there will be no escaping smart-arse comments from well-lubricated attendees. 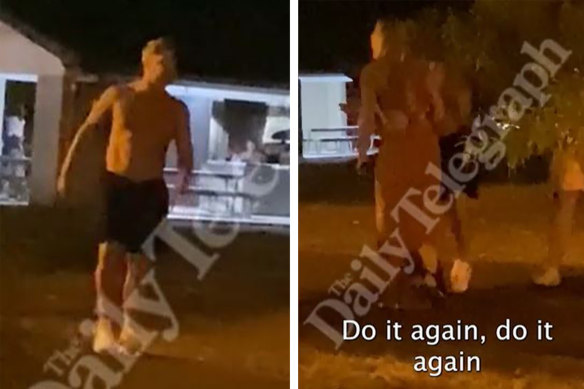 Michael Clarke (left); who appears to be slapped by his girlfriend in the video (right).Credit:The Daily Telegraph

Expect Clarke to take it in his stride and roll with the punches and the slaps to the face — something he handles much better in retirement than his playing days.

He isn’t a terrible guy, just terribly flawed like the rest of us, constantly looking for love in all the wrong places. Like all professional sportspeople, he seems to struggle with life in retirement.

I chatted to him last week, the day after the incident with Stefanovic, and he was in great spirits.

We talked mostly about cricket matters, but he added that he was relishing his breakfast radio gig, except for the early starts, but was mostly living a quiet, uncomplicated life and keeping a low profile.

If the NRL hasn’t come up with a theme song for the 2023 season, may I humbly suggest Guns N’ Roses Civil War from their 1991 album Use Your Illusion II.

What better way to celebrate this ongoing pay dispute — that isn’t about pay but respect, apparently — involving the NRL and the RLPA?

The players this week ramped up their protests about the CBA stalemate when they refused to participate in NRL photograph and interview sessions.

It hardly had ARL Commission chairman Peter V’landys, nor NRL chief executive Andrew Abdo, shaking in their moccasins. V’landys has been downsizing NRL.com since becoming chair. 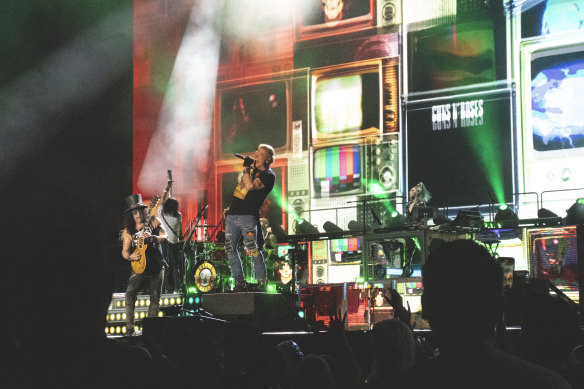 Slash and Axl Rose perform in Sydney in November. Could the Guns n’ Roses classic Civil War be on the agenda for this year’s grand final entertainment?Credit:Guilherme Neto

The game can survive without fresh headshots, but it can’t fulfil its broadcast deal without players and that’s where it’s heading according to senior players Christian Welch and Kurt Capewell, both of whom have floated the idea of a strike.

If we all had a dollar for every time the players have suggested that over the years, we’d be in early retirement and holidaying at a White Lotus resort.

How many of the 600-strong playing group are prepared to not get paid for a week? A month? Longer?

The NRL has not-so-subtly fed the line that the players are being greedy because they’re not content with a 25-per-cent increase in the salary cap. It’s a public relations battle the players can never win, even if what they’re asking for is reasonable and they have indeed entered negotiations in “good faith”.

Privately, some NRL powerbrokers are pushing the line that the players are divided on the matter with some prepared to accept their offer.

I’m not so sure. Late last year, I received numerous text messages from senior players who wanted V’landys and Abdo gone. That’s a first.

It’s hard to remember a time when the distrust between head office and its greatest asset — the players — was so strong.

Opinion is firmly divided over Rugby Australia’s decision to sack Wallabies coach Dave Rennie and replace him with Eddie Jones.

A Herald online poll on the matter has attracted almost 21,000 responses and the result at lunchtime yesterday was only slightly in Rennie’s favour, 51 to 49 per cent. 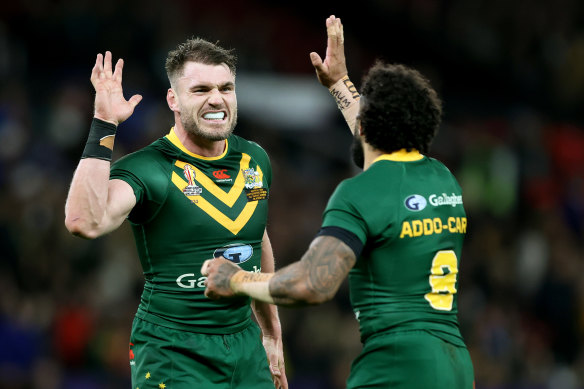 Angus Crichton is a former Australian Schoolboy who might be lured back to rugby.Credit:Getty

It says a lot about the dire state of the code when some considered Rennie’s 5-9 win-loss record last year as a sure sign he was building something special for the World Cup in France starting in September.

As Rennie handled his sacking with dignity, Jones was stirring things up by suggesting he would look at reclaiming three Australian Schoolboys players lost to rugby league.

He wouldn’t name them but was ostensibly referring to Cameron Murray, Angus Crichton and Joseph Sua’ali’i.

Murray is a future Kangaroos captain, Crichton is starting to find his feet in Australian and NSW teams while the Roosters are confident of securing Sua’ali’i to a long-term deal soon.

RA chairman Hamish McLachlan’s infatuation with Jones is at the heart of the change — and it would have come at a price.

Rennie was reportedly on $1 million a season, leaving RA with a nine-month payout. Jones doesn’t get out bed for anything less than $1 million a season. He was on about A$1.3 million while coaching England. If this doesn’t work out, it will be on the chairman and nobody else.

Nick Kyrgios fronted a media conference on Monday to announce he was withdrawing from the Australian Open because of a knee injury.

The pile-on was fierce and unfair. If Kyrgios really wanted to be selfish, he would’ve taken the court in the first round and retired injured before picking up $106,250 in prizemoney. 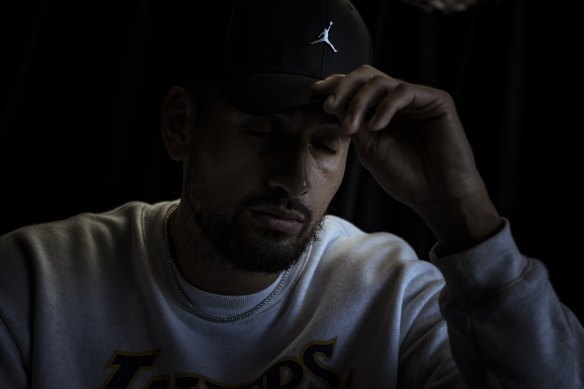 Unlike other tournaments around the world, he doesn’t attract an appearance fee for playing in his home grand slam, but his early departure has cost him endorsement opportunities.

As for the faux-outrage after he was photographed riding an e-scooter on the streets Melbourne without wearing a helmet, people really need to find a hobby — or Resch’s.

THE QUOTE
“Hey Nick …” – A journalist at the Australian Open gets the media conference with Thanasi Kokkinakis offer to a flyer following his first-round win against Italian challenger Fabio Fognini. His response: “That’s shithouse from you.”

THUMBS UP
The NBA is officially giddy for Australian Josh Giddey, whose rapid ascent in his second season with Oklahoma City Thunder continues. He’s scored more than 20 points in his last three matches, the latest a 28-point effort against the Brooklyn Nets. He’s in All-Star calculations.

IT’S A BIG WEEKEND FOR …
The Sydney Kings, who are having a much better year than most royals, although they have a tough road-trip on Friday night against the Perth Wildcats and their always hostile fans.

IT’S AN EVEN BIGGER WEEKEND FOR …
Former South Sydney prop Jordan Mailata, who lines up at left tackle for the Philadelphia Eagles against the New York Giants in the NFL’s divisional round in Philly on Sunday AEDT. He’s got a big job ahead protecting the injured shoulder of quarterback Jalen Hurts.