LIVE SCORECARD: Ben Foakes brings calm instead of chaos after England’s reckless top order are blown away on the opening morning against Sri Lanka

Ben Foakes brought calm instead of chaos to the first Test here on Tuesday when he led an England recovery after a frenetic morning had seen them lose five wickets.

Foakes, only called up here as cover for the injured Jonny Bairstow, was handed his debut when England changed their Plan A of batting Joe Denly at three and handing the gloves to Jos Buttler in Bairstow’s absence.

And how the second Surrey debutant of this match – his county captain Rory Burns opened – made the most of his unexpected chance by reaching an unbeaten 49 by tea to bring stability back to England’s batting. 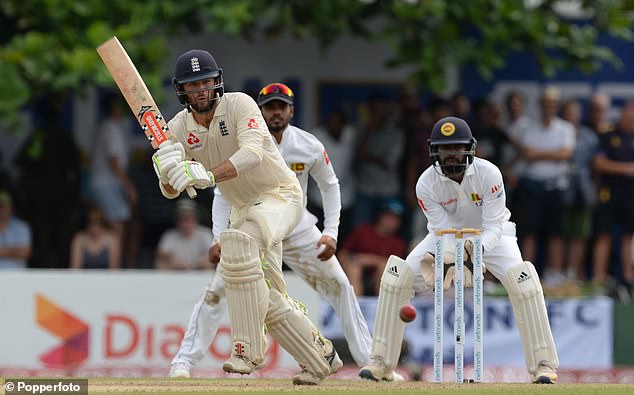 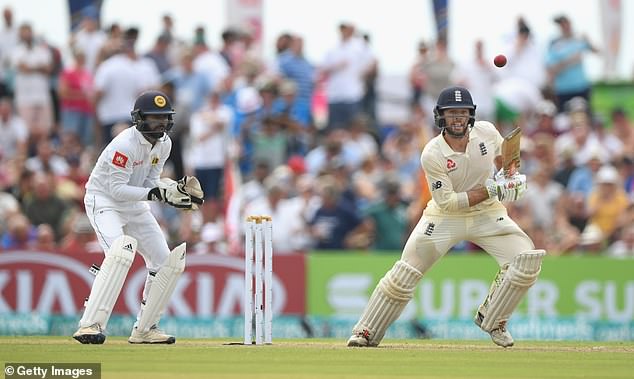 Together with Sam Curran, Foakes took England to relative respectability of 199 for six by tea

Together with yet another man of the Oval in Sam Curran, who was preferred to Stuart Broad and Chris Woakes, Foakes has taken England to the relative respectability of 199 for six by the interval.

That represents quite a recovery from a woeful morning in which England batted brainlessly in the name of positivity, Joe Root, Ben Stokes and Keaton Jennings all falling to awful strokes as they collapsed to 103 for five.

Foakes, 25, did it simply by batting sensibly at a Test match tempo on a pitch that is nothing like the sharply turning surface expected here after South Africa were twice rolled over cheaply by spin in Galle in July.

The pitch at this most charming of Test venues will certainly take more turn as the match goes on but for now batting is as comfortable as it should be in Test cricket and England desperately need to go on to capitalise on Foakes efforts.

It was, unexpectedly, seam that did the early damage after Root had won his sixth successive toss, with Suranga Lakmal taking the wickets of Burns and Moeen Ali, who moved up to No3 in the reshuffle that cost Denly his proposed place, in successive balls in the fourth over.

England lost five wickets, including captain Joe Root, in the opening session of the first Test

Debutant Rory Burns was the first to go, strangled down the leg-side off Suranga Lakmal

Moeen Ali, England’s first drop, then had his off stump removed first ball by Lakmal

Root and Jennings steadied the ship but then the captain, far too frenetic, came down the wicket and yorked himself to give Rangana Herath his 100th wicket at Galle in his last Test before retirement.

Stokes was somehow bowled middle stump attempting a dab sweep and Jennings was bowled leg stump attempting to cut after at least reaching 46, his highest score since he was recalled by England last summer.

Then England’s two keepers in Buttler and Foakes combined for a stand of 61 until a ball by off-spinner Dilruwan Perera kept low and saw Buttler edge to the excitable figure of Niroshan Dickwella, who took a good low catch.

Curran, man of the series when England defeated India 4-1 in the summer, showed his class with a straight six off Akila Dananjaya as England clawed their way towards the sort of score that would give them hope here.