The way Nick Hockley tells it, it is difficult to overstate the complexity of planning a cricket summer in the time of coronavirus.

Throw in a major dispute with your free-to-air broadcaster and intransigence from state governments, and it’s an assignment the likes of which administrators in any Australian sport have never seen. 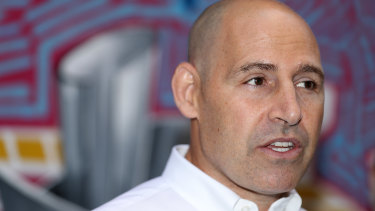 Finally, after no shortage of hurdles and hiccups, it’s starting to take shape. The Sheffield Shield and the Women’s Big Bash League are in full swing, the men’s BBL roadshow has been announced and next Thursday the star attractions of the season – Virat Kohli’s India and Australian stars Steve Smith, Pat Cummins and David Warner – will arrive direct from the Indian Premier League to begin two weeks of quarantine in Sydney. They will be in action at the SCG in their countries' respective coloured clothing the day they emerge from isolation.

For Hockley, the Oxford-educated events specialist thrust into the top job at CA when Kevin Roberts departed in June, it’s been a baptism of fire.

“There’s been uncertainty all the way through. There’s been pressure on a lot of people because of that,” said the Englishman, who has run the sport since the winter from Sydney’s eastern suburbs, where he lives, rather than CA’s base in Melbourne. 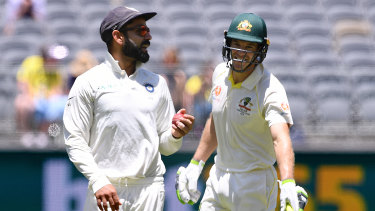 Virat Kohli and Tim Paine will resume their rivalry when the Test series starts on December 17.Credit:AAP

“I’ve always felt we needed to hold our nerve but also plan for the worst. As we stand here today, to be able to play in the original Test locations, I think it’s a fantastic outcome.

“Bringing in an international team and touring them around the country hasn’t been done [since the pandemic started].”

It’s not all plain sailing ahead for cricket just yet, of course. The border situations and the status of the virus around the country will determine whether the schedule plays out as drafted, most notably whether the Boxing Day Test is held in Melbourne.

'You only have to look at the ratings now … people are thrilled to have cricket back.'

And there is every chance that at the height of the season next month, the stoush with Seven West Media will be back in the headlines and the ins and outs of it aired in court.

Sources with knowledge of the talks between CA and Seven say the sport offered the network a markdown of 20 per cent of its $75 million fee this summer – a sum of $15m – but with the savings spread out over the remaining four years of the deal. It meant Seven would get a discount of $3.75m over each of the next four seasons rather than shave $15m off their debt-laden books straight away. The offer was rejected without even making it to the Seven board.

The parties are now before the Australian Centre for International Arbitration but CA is there under protest and is highly unlikely to accept an outcome that differs dramatically from the terms of its contract with Seven.

“A feature of this whole journey we’ve been on to get to this point is our partners have really stood by us and supported us in the main,” Hockley said. 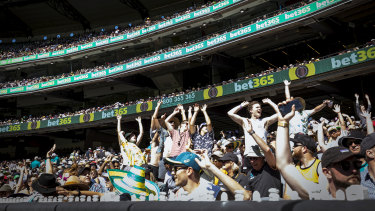 Organisers are hoping for crowds of up to 25,000 a day at the MCG.Credit:Chris Hopkins

“I can’t speak highly enough of Foxtel, [who] have supported us through this. We really value Seven as our partner. It’s been disappointing some of their public comments. We’ve been consistent all the way through that we’re going to deliver a full summer of cricket, so I think some of their concerns or premonitions … we always said they were premature.

“I think what you’re seeing now is you only have to look at the ratings now, people are enjoying watching the Sheffield Shield, the WBBL … people are thrilled to have cricket back.

“I was talking to [Seven chief executive] James [Warburton] today and we were talking about their production plans and they’re very much getting on with it.

“The scheduling of the season is actually not inconsistent with previous seasons. The main change is we’re playing two Tests after the New Year and the reasons for that are the unique nature of this summer. But we’re just thrilled India are touring. We really appreciate the support of the BCCI [Board of Control for Cricket in India]. I think international cricket has really come together at this time.”

Throughout the drama with Seven, and the other problems of the past five months, one of the CA chief’s main backers has been the national men’s coach Justin Langer.

Perhaps unsurprisingly, Langer supplied him with a batting analogy to help deal with what he has been facing.

“I've taken quite a bit of inspiration [from Langer]. You can think a lot and speculate about the overall outcome but ultimately, in terms of actually putting on the summer, you actually need to think about all the building blocks, the pieces of the jigsaw puzzle.

“It’s about focusing on the next ball, and staying true to the fact we need to deliver for our partners and deliver for the cricketing public all around the world.”

November 6, 2020 Сricket Comments Off on ‘Like putting on 10 World Cups’: Inside cricket’s mission to deliver Indian summer
NFL News