Gary Kirsten is in line to be appointed England head coach this week in a major coup for Ashley Giles, the England team director.

Giles will hold face-to-face talks with Kirsten at Lord's on Wednesday to finalise a deal to replace Trevor Bayliss, who left the job at the end of the Ashes series. An appointment is expected by the end of the week, barring any last-minute hitches. 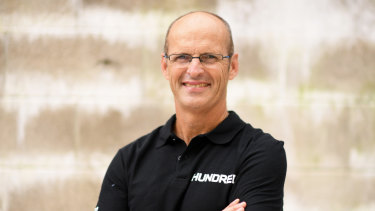 Gary Kirsten is set to be appointed England coach.Credit:Getty Images

The London Telegraph revealed last week that Kirsten was England's No.1 choice and they were hopeful of persuading him to take over from Bayliss. The stumbling block was that Kirsten had turned his back on international cricket in 2013 in order to spend more time with his young family.

But Giles, and the corporate headhunting company used by the England and Wales Cricket Board, have managed to assure Kirsten he will be given time off in an arrangement that suits both sides.

Giles will appoint two English assistant coaches to back up Kirsten and to take over certain Test and one-day international series in order to give them experience of running the side, with a view to appointing an Englishman when Kirsten eventually steps down.

Giles wants to improve succession planning and ensure there is an English coach with enough experience to take the top job in the future after appointments of an Australian (Bayliss) and South African (Kirsten).

Giles has been adamant throughout the process that he wanted one man in charge of both the Test and one-day sides, which appeared to rule out Kirsten.

But the salary will be an increase on what Bayliss earned and is expected to be in excess of £500,000 per annum ($A916,000), plus win bonuses. That, and the chance to help Joe Root revitalise England's talented Test team, have persuaded Kirsten to change his mind.

Kirsten had already agreed to take over the Cardiff franchise in the Hundred. But accepting the England job allows the ECB to appoint an English coach in his place, after it received criticism for appointing only foreign talent to coach the eight teams.

Richard Dawson, the Gloucestershire coach, is understood to be one of the ECB's preferred candidates for the job as England women's head coach, a position he could combine with the Hundred franchise in Cardiff. Dawson is one of the most highly rated young English coaches in the county game and would be a good choice to take over from Mark Robinson, who left his job as England women coach after losing the Ashes.

Marcus Trescothick would also be a popular choice to coach the Cardiff franchise after retiring from playing last week.

The Telegraph also understands that Andy Flower, the former England coach, is on the shortlist to be the new head coach of the Rajasthan Royals in next year's Indian Premier League. Flower is expected to leave his role with the ECB this winter. Andrew Strauss, the former England captain, and Clive Woodward, the Rugby World Cup-winning coach, are believed to be involved in the recruitment process for Rajasthan.

Strauss has described Flower as the best coach he has ever worked with and taking over Rajasthan would put him in charge of Ben Stokes, Jos Buttler and Jofra Archer.

It would be Flower's first big coaching job since standing down from his England role in 2014. Since then he has worked with the England Lions.