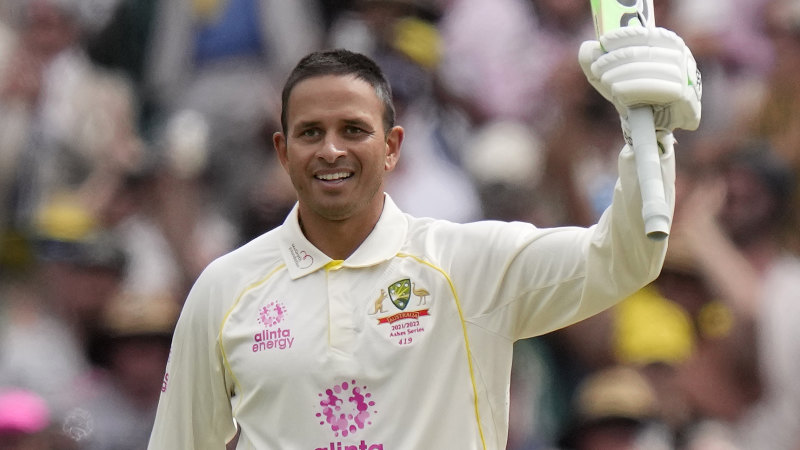 The celebration of Usman Khawaja’s triumphant SCG homecoming has laid the foundation for another brutal Australian assault on England.

The boisterous crowd that willed the former Sydney boy to a century on his return to Test cricket during the second day of the fourth Test was then treated to Australia’s world-class pace attack sending down five hair-raising overs at England’s openers on a pitch developing demons to round out the day.

By stumps, England were an uncertain 0/13 after Pat Cummins had declared at 8-416, the Australian innings built around Khawaja’s 137 playing his first Test in 18 months as a replacement for the COVID-19 constrained Travis Head.

England would have already been one down had Mitchell Starc not overstepped by a millimetre for a no ball as Zak Crawley on nought edged to David Warner at first slip.

Starc had already enhanced his sudden standing as an allrounder this season, scoring an unbeaten 34 for 151 runs this season at an average of 75.5.

An uncertain weather forecast would appear England’s best chance of avoiding a fourth successive defeat as Australia strives for another 5-0 whitewash. 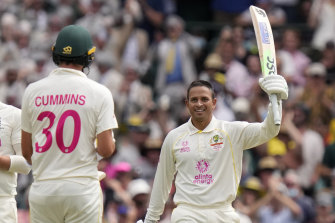 Usman Khawaja raises his bat after reaching 100 against England on Thursday.Credit:AP

Khawaja’s celebration was as unrestrained as his glorious cover driving, including the knee-raising imitation of basketball star LeBron James.

By the time Stuart Broad snuck a delivery through Khawaja’s defence late in the afternoon, Australia were a quick two away from 400, and history said only one team could win.

Broad’s 5-101, his 19th five-wicket haul and second in Australia, underlined yet again the folly of England’s bizarre decision to leave him and fellow veteran Jimmy Anderson out of the pivotal first Test in Brisbane. Has there ever been a greater case of mindless over-thinking?

The delicious selectors’ headache that Khawaja’s century creates when Head returns for the last Test in Hobart is next week’s problem. Chatter around opener Marcus Harris has become more intense, but Harris scored a Boxing Day Test high 76 on a difficult Melbourne pitch a week ago and at 29 is six years younger than Khawaja.

England have managed to score more than 240 just once in six outings this summer and were dismantled for just 68 last time out in Melbourne to lose by an innings as Australia retained the Ashes.

The dismissal of Cummins, the world’s best fast bowler, for 24 was a telling portent for what lay ahead as a short ball from Broad reared at the Australian captain, taking the glove as he fended instinctively.

The well-grassed pitch has produced alarming lift at times, yet there was one delivery from England speedster Mark Wood which almost rolled along the ground, forcing wicketkeeper Jos Buttler to call for some treatment to a battered hand after an awkward take.

England were well in the match after a truncated first day of showers left Australia resuming at 3/126, and Steve Smith in survival mode with Khawaja during some impressive early England seam and pace bowling.

But the pressure was released when England captain Joe Root brought spinner Jack Leach into the attack and spread the field like he was sending his players on an orienteering course.

Like many of England’s batsmen, Leach has proved wholly inadequate on this tour, yet he created the only opportunity to remove Khawaja before the damage became too great.

On 28, the left-hander edged a delivery which flicked Buttler’s leg and lobbed to Root at slip. Surprised by the lack of pace, Root dropped the chance and with it any chance England had of remaining competitive in the match.

A short time late,r Ben Stokes walked off holding his side after delivering a bouncer barrage, an injury officially described as “tightness.” He returned to field in the slips but did not bowl, leaving Root to join Leach delivering some underwhelming overs of spin.

Having settled in, it appeared Smith was on the way to breaking his century drought until a radar malfunction brought him undone.

Smith was 67 in a 115-run partnership with Khawaja and batting England out of the game when the vice-captain padded up to a ball which he obviously felt was going down the leg side and survived a close review.

Then he defended a ball well outside his off stump which left him off the pitch to be caught behind. There may have been movement away off the pitch, but Smith knew as he walked off that he should have simply shouldered arms.

He has managed just one hundred since his stellar 2019 Ashes tour, against India in Sydney a year ago, and may not have the chance in the second innings given the weather forecast and England’s fragile batting.