White-ball great Yuvraj Singh is keen to become the first Indian to play in the Big Bash League. Now the issue is whether a club wants to sign him.

The 2011 World Cup player of the tournament's push to join the BBL comes as Australian Cricketers' Association president Shane Watson says the inclusion of Indian players to the competition would be "incredible" for the competition. 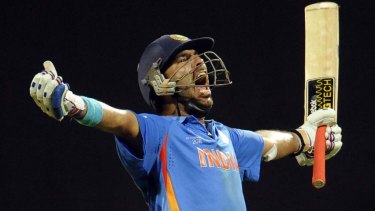 The BBL is entering its 10th season but it is yet to feature even a single Indian player. This is in large part because the Board of Control for Cricket in India has not issued no-objection certificates for players unless they have retired from the Indian Premier League and are not needed for international duties.

This rules out most of India's leading players, but Yuvraj last played for India in 2017 and has retired from the IPL, meaning he is now free to play in overseas Twenty20 leagues.

Yuvraj, 38, is actively pursuing a BBL opportunity for this summer, with his manager Jason Warne of W Sports & Media confirming that Cricket Australia were interested in finding the former Indian superstar a club in the Australian T20 league.

"We're working with CA to try to find him a home," Warne said on Monday.

Industry sources suggested that interest in Yuvraj from BBL clubs had been modest to date.

The calibre of international players in the BBL has been a longstanding issue, with CA keen to improve the quality of imports coming into the competition, a move which would help appease broadcasters at a time of extremely strained relations between CA and Channel Seven.

CA had also been planning an overseas player draft for the upcoming season. That idea was shelved because of logistical issues related to COVID-19 but CA has indicated it plans to proceed with the draft for season 11 of the competition.

Former Australian and Sydney Thunder captain Shane Watson said an injection of Indian players into the BBL would provide a major boost for the league. 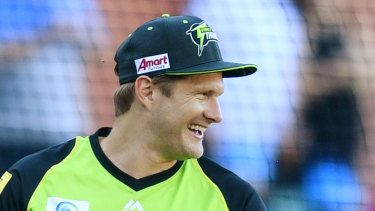 Boost for the league: Shane Watson.Credit:AAP

Ex-Indian captain MS Dhoni has been touted as a player CA would be keen to bring to the BBL, although Dhoni is still playing alongside Watson with the IPL's Chennai Super Kings.

"There is a chance but no Indian players have been able to be released in the past to come and play at the [other] T20 tournaments so that's a big hurdle," Watson said from Dubai ahead of the upcoming IPL season, which was pushed back and relocated because of the pandemic.

"If that's able to happen, that would make a massive difference."

Watson meanwhile downplayed concerns around the relationship between the ACA and CA following a dramatic winter off the field.

"I think it's in a great spot. Even with what happened during the re-forecasting, that was handled in a very diplomatic way. It certainly was done amicably. It wasn't done in other ways which have been done in the past, which was a bit more combative. That was done in a much more civilised way," Watson said.

"The players are going to be going above and beyond to make sure that cricket does go ahead across the summer. Everyone just wants to get some normality back across the board for the players but also the cricket-loving public as well.