Sydney Thunder paceman Gurinder Sandhu said he didn’t even realise he’d snared a hat-trick in Thursday night’s victory over the Scorchers until the end of the innings.

Sandhu’s third professional hat-trick inspired the Thunder to a six-wicket victory over ladder-leading Perth on the Gold Coast in a match reduced to 18 innings after a rain delay. 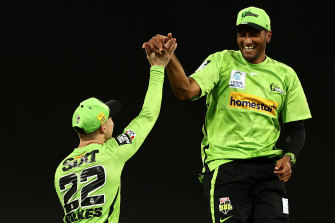 The 28-year-old bagged the wickets of Colin Munro, Aaron Hardie and Laurie Evans in consecutive deliveries to put the Thunder in control. Munro fell on the last ball of the 12th over when he struck Sandhu straight to cover. The paceman returned to the attack in the 16th over, and Hardie immediately holed out in the deep. Evans then skied one for an easy catch.

“I had absolutely no idea [it was a hat-trick], which is kind of a good thing because then maybe I would have tried too hard on that ball or changed up what I was doing,” Sandhu said.

“As I walked off, I chatted to Erin Holland from Channel 7 and she said, ‘Well done, the first Sydney Thunder player to get a hat-trick’.

“I actually thought in my mind that she stuffed up, but I was the one who had it wrong.

“I was surprised because I had no idea. I’ve already had one this year, so I was like, ‘there’s no chance anybody can get two in a year, let alone in a career’. It’s pretty cool. It’s something when I finish playing I’ll look back on and go, ‘wow’.”

In November, Sandhu snared a hat-trick while playing for Queensland in a 50-over match against South Australia. He also achieved the feat for Tasmania against Victoria in the Marsh Cup final in 2018.

Sandhu finished on 4-22 on Thursday as the Thunder restricted Perth to 9-133. Under the Duckworth-Lewis-Stern method, the Sydney side needed 135 for victory and reached the target with six balls to spare.

January 6, 2022 Сricket Comments Off on ‘I had absolutely no idea’: Sandhu’s shock at being told he’d bagged a hat-trick
NFL News