Steve Smith has backed David Warner to find his scoring touch in the coming weeks as the duo prepare for their first Sheffield Shield matches for NSW in two years. 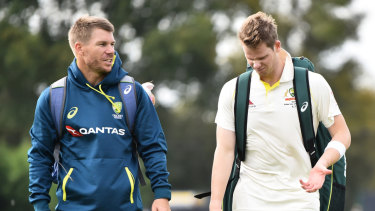 Old firm: Steve Smith and David Warner will make their return to the Sheffield Shield arena on Thursday after a two-year absence.Credit:Getty Images Europe

"Opening the batting over there can be tough, particularly being a left-hander – [Stuart] Broad, [James] Anderson, [Jofra] Archer, they all bowl very well to left-handers.

"But he's obviously a quality player, we know that. He's got an exceptional record in Australia and he'll be looking to get some runs under his belt in the next few weeks and be good to go. You've always got to look at conditions when you're looking at players and what have you.

"He's played a lot of cricket now, he knows that you can go through those periods and come out the other side and he'll be looking to spend some time in the middle over the next couple of Shield games and then play the T20s for Australia and just keep finding the groove.

Smith declared himself physically, mentally and emotionally refreshed after the gruelling Ashes series, in which he quickly re-established his dominance at Test level after his ball-tampering ban.

The 30-year-old only returned to the nets this week, and was planning to get one more session under his belt later on Wednesday before making his return for the Blues.

"I was kind of just cooked and exhausted and needed to just let it go for a bit. I got the itch a few days ago to get [a bat] back in my hands," Smith said.

"I'm excited. I like playing at the Gabba. I loved every minute of playing over in the UK, that was great fun, and to be playing here in Australia again, I can't wait.

"The wickets in Shield cricket can be a little bit different to Test cricket so it'd be interesting to see what that looks like when we get up there, but I had a good couple of weeks off to just freshen up and looking forward to getting back out there now."