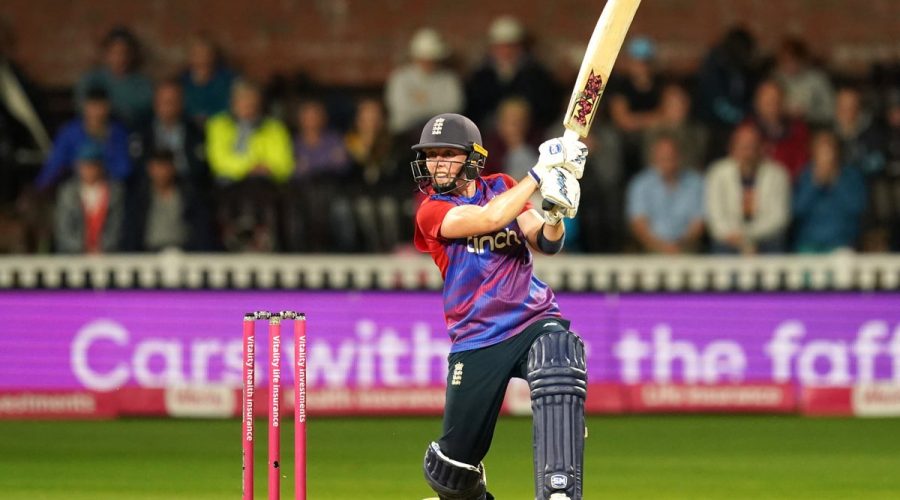 Sophia Dunkley struck a four with one delivery remaining to complete a four-wicket win and earn the home side a 2-1 triumph in their final T20 series of the summer.

Captain Knight, on her return to the side from a hamstring injury, capped her 200th appearance for the national side in all formats by top-scoring with 42 as England chased down New Zealand’s 144 for four.

Both sides had started their innings slowly, but New Zealand made a number of fielding errors, allowing the ball to slip over the boundary rope on more than one occasion as England edged closer to the total.

“(I’m) really delighted. Obviously (I) have been sat on the sidelines the last couple of games so it was really nice to get back out there,” Knight said.

“I’m not a great watcher to be honest so really enjoyed getting back out there with the girls.

“I always felt like we were in control, probably got a little bit tighter towards the end than we wanted it to, but it was great for Sophia Dunkley to deal with that pressure and see the side home in that last over.”

With England needing 15 from 11, Knight found the leg-side boundary to edge her side closer, but with just eight needed to clinch the series she picked out cover as New Zealand continued to battled to the end.

England required seven off the final over, and when Maia Bouchier was bowled off the first ball and Amy Satterthwaite limited the hosts to just three runs off her first four deliveries, it looked like New Zealand might snatch the honours.

But Dunkley managed to power Satterthwaite through midwicket for the match and series-winning boundary.

“Yeah it felt like we were always around seven (runs an over needed) so it was relatively comfortable, it was a pretty good deck,” the England captain said.

“I wasn’t hitting as many boundaries as I wanted really, I was probably a bit rusty, hit the fielders quite a lot but it was a pretty calm chase.

“I think we knew if me and Amy in particular – if we extended that partnership and one of us was there to finish the game off we would be on the winning side.

“So obviously I was very annoyed that I got out when I did and wasn’t able to finish it off, but it was really good pressure soaking up of our young players and really nice for Dunks (Dunkley) to see us over the line.”

New Zealand captain Sophie Devine admitted she was disappointed to lose, but insisted her side can take positives out of the final T20.

“I think we wanted to have a bowl first as well but I was really pleased with the total that we put on the board,” Devine said.

The captain, who had scored a half-century as her side levelled the series in the previous T20, top-scored again with 35, with Suzie Bates scoring 34 at the top of the innings on her 250th appearance for the national side.

“As you could tell it went right down to the last over, and a few things here or there (could have changed the outcome). (It’s) disappointing to lose but this group will take a lot out of it.”

She added: “There were a few slip-ups in the field which proved costly. To finish with a flourish that’s what we’ve spoken about as a group.”