Boom paceman Jhye Richardson has been hailed as a ruthless silent assassin who is ready to break up Australia’s triumvirate of quicks after a spell that has sent shockwaves reverberating across the country.

Within one hour last week, Richardson morphed from an Ashes hopeful to a genuine chance of taking the new ball for the first Test at the Gabba.

Watched on by head selector George Bailey, the West Australian swing bowler stifled Marnus Labuschagne and Joe Burns during a suffocating hour-long spell in which he claimed the wickets of both internationals. 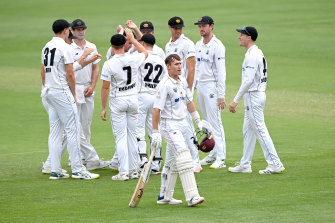 Marnus Labushagne trudges off after being dismissed by Jhye Richardson last week.Credit:Getty

His performance not only left Labuschagne and Burns in awe, according to Bailey, but also moved former Test paceman Andy Bichel, now Queensland’s bowling coach, and his opposing number at WA to set as the yard stick for their respective attacks.

Across seven mesmerising overs, Richardson conceded just four runs – an edge through third man – while claiming the wickets of Labuschagne and Burns. 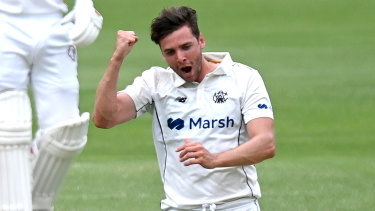 “You could see the Queensland guys, our guys, the common phrase was ‘this was just different gravy’,” WA’s fast bowling coach Matt Mason said.

“What Jhye does is he sniffs blood. His tail was up, he was steaming in.

“What he does really well is he doesn’t get excited by conditions. He just sums it up, realises when the ball is doing more, he has to try less. He just has the ball on a string. He had relentless pressure building on those two really good players.”

At 178cm, Richardson is not the typical giant Australian fast quick, nor does he have the trademark snarl. What he does have is express pace and a deadly late outswinger.

At a recent training session, Richardson was clocked effortlessly bowling at about 137km/h. Asked to crank up the engine to close out practice, he sent down a 145km/h thunderbolt, as if flicking a switch.

In late 2017, the then 21-year-old was recorded by a Cricket Australia speed gun at 148km/h during a fiery spell to Steve Smith. He was the fastest in the game, topping Pat Cummins, Mitchell Starc and Josh Hazlewood.

If not for a serious shoulder injury in 2019, Richardson would already have added to his two Tests and six wickets from his short stint in the baggy green three seasons ago. With fast bowling rotation back in vogue, Richardson is a strong chance to return for the first Test in Brisbane.

Richardson has been likened to England great James Anderson, the owner of 632 Test wickets, and NZ swing king Tim Southee by Mason, who has rubbed shoulders with pace greats such as Allan Donald, Shoaib Akhtar and Zaheer Khan during a long and successful career in county cricket, first as a bowler and then as a coach.

“When I watch Jhye bowl, I immediately think of some of the spells Jimmy Anderson bowled, especially earlier, when he was good pace at 85 to 90 miles and swinging it,” Mason said.

“Genuine fast swing bowlers, they’re a dying breed. I think Jhye is one of few who can genuinely swing the ball.”

“He’s got all the ingredients. For a fairly slight person he generates a significant amount of pace – very fast, swings the ball late,” Nevill said.

“He’s good at bowling aggressive spells as well. He’s certainly got all the attributes to be successful at international cricket, as you’ve seen already. His pace is probably what stands out the most.”