Mitchell Starc is struggling to contain his angst as one of Australia’s few senior players to make himself available for the West Indian tour.

The fast bowler has given up millions in IPL contracts in recent years and is in the Caribbean trying to guide an inexperienced squad against some of the world’s most dangerous white-ball cricketers.

Australia lost the T20 series 4-1, mainly due to poor batting and modest fielding. Starc bowled a million-dollar final over in game four against power hitter Andre Russell to secure the only victory.

“I’ve certainly got my own opinions that I’ll keep to myself,” Starc said.

“We’ve got this group here. We can still win a series and we’ve got some things to improve on from the Twenty20s that hopefully we can do in these one-day games.”

The squad has relocated from St Lucia to Barbados for three one-day matches, beginning on Wednesday. Captain Aaron Finch is in doubt due to a knee injury. 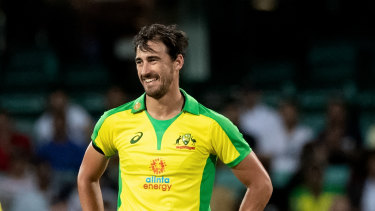 Mitchell Starc had just 11 runs to play with in the final over but bowled five straight dots balls.Credit:Getty

There is some confusion over who will lead the side if Finch is unable to play. Starc tossed up Matthew Wade, Alex Carey, Josh Hazlewood and Moises Henriques as possible candidates.

Half-a-dozen of Australia’s leading white-ball players who competed in the IPL are unavailable for a variety of reasons compounded by a frantic year of constant COVID-19 bubbles, quarantine and shifting schedules.

This tour may also include five T20s in Bangladesh, if adequate biosecurity measures are confirmed.

“I’ve got my own personal views but at the same time each of those [absent] guys are in different situations, which I guess determined their decisions about this tour,” Starc said.

“Obviously you throw in different conversations about different bubbles and quarantine bubbles and the like, obviously that would have come into some guys’ decisions. Ultimately we’re here with a strong group of Australian guys and some young, inexperienced guys with a chance to perform and potentially lock down some World Cup squads.

“Sure you’ve got some guys still at home doing whatever they’re doing at the time.”

Starc has turned down IPL money because he prefers to use the April-May window, after long Australian summers, to spend with family and friends, particularly wife and fellow Australian star Alyssa Healy.

“I’m a multi-format player and those are a few weeks where we can get away from the game and refresh mentally and physically,” Starc said.

“Alyssa, my wife, plays as well and we have conflicting schedules. A lot of the time that’s the only time we can spend at home together. 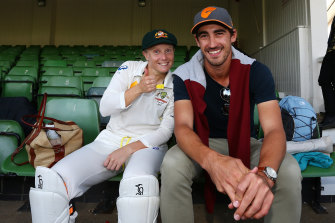 “Over the last few years I’ve used that time so I can be at my best or ready to go for Australian duty and not have to pick and choose through tours.

“That was certainly the case with the previous IPL and I’ll keep assessing it year by year and see what the schedule looks like and where I’m at with my cricket and my body and see how we go from there.”

COVID-19 and scheduling confusion looks set to have a major impact on the start of this season.

The T20 World Cup is due to run from mid-October to mid-November, with two weeks of quarantine on returning to Australia running straight into the start of the inaugural Test against Afghanistan in Hobart from November 27.

It opens the door for Queensland seamer Michael Neser to make his Test debut after being a member of recent Australian squads following consistently strong performances for the Bulls. Injury-plagued Victorian speedster James Pattinson would also be in line for a recall.

“It’s not like we’re not playing cricket but it creates an interesting challenge, one I’m sure Cricket Australia are working on in the background along with a few governments and what that might look like for the start of the summer,” Starc said.

“In terms of the bowling and the workloads, it wouldn’t be the first time myself, Josh [Hazlewood] and Pat [Cummins] haven’t played any red-ball cricket leading into a summer.”

Starc is hopeful the players will be able to train while in quarantine, as they did after returning from last year’s white-ball tour of the UK.

“It’s something I was involved in during the two weeks we had in Adelaide after the UK tour. It was predominantly red-ball focused training and workload training. Obviously at this stage and what I’m aware that period could look like, it’s almost overlap or straight out of quarantine into red-ball cricket.

“There’s a lot of water to go under the bridge in terms of organisation. Test cricket is still the pinnacle, certainly in my eyes. Hopefully we can sneak both a World Cup and a Test match in but we’ll play the cricket in front of us at the minute and hopefully CA and the like can organise that as well.”

With a full Ashes series to follow, Starc concedes it is unlikely any fast bowler will play all six Tests next summer. He pointed to the 2019 Ashes tour squad mentality, where Cummins was the only fast bowler to play all five Tests.

“No doubt all the players will want to play every game,” Starc said. “It’s hard to take the ball out of anyone’s hand but certainly the mindset of the fast bowlers is wanting to win series.”

July 19, 2021 Сricket Comments Off on Frustrated Starc giving up millions to play for Australia
NFL News