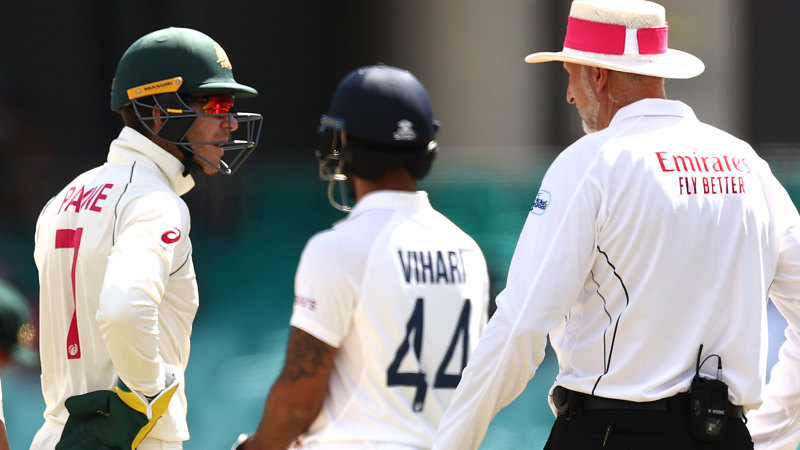 Tim Paine faces a possible fine or even being suspended from the fourth Test after stump microphones picked up the Australia captain swearing towards umpire Paul Wilson following an unsuccessful review in the third Test at the SCG.

Paine could land in hot water over the incident, which occurred when Nathan Lyon, bowling from the Randwick end early on day three, believed he had Cheteshwar Pujara caught in close on the leg side for 13 by Matthew Wade. 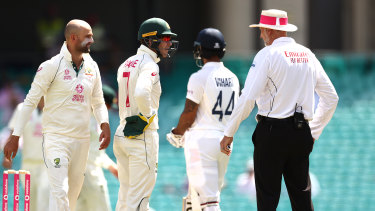 On-field umpire Wilson wasn’t convinced there was bat involved and the Australians sent the decision upstairs. Television official Bruce Oxenford couldn’t find any conclusive evidence on Snicko and Hot Spot that the ball hit the bat before pad.

When Wilson was asked to keep his original decision, Paine protested to the umpire that the off-side angle of Hot Spot needed to be more closely examined.

Wilson said to an upset Paine: “[Oxenford is] making the decision, not me, I’m not the third umpire,” before the Australian captain let rip.

“F—ing consistency, Blocker,” Paine was heard saying over the microphone. “There's a thing that goes past [the bat].”

Wilson stood his ground as Paine went back behind the stumps to finish the over. He was clearly still fuming at the decision and continued to mutter grievances.

“There was definitely a thing on Hot Spot,” Paine said. “What’s the f—ing difference? Or Snicko.”

Paine's comments could lead to him being fined under the International Cricket Council's code of conduct – or even suspended from the fourth Test if it was judged serious enough.

A level one offence would result in anything from a warning to being fined 50 per cent of his match fee but if match referee David Boon found Paine guilty of a level two indiscretion, he could receive up to two suspension points, which would rub him out for the fourth Test.

Section 2.3 of the code of conduct covers "the use of words commonly known and understood to be offensive, obscene and/or profane (in any language) and which can be heard by the spectators and/or the viewing public whether by way of the stump-microphone or otherwise".

Section 2.8 relates to "excessive, obvious disappointment with an umpire's decision" and says when determining the seriousness of the breach, match officials should consider "whether the conduct contains an element of anger or abuse which is directed at the umpire or the umpire’s decision" and "whether there is persistent re-reference to the incident over time".

Wilson was the third umpire who controversially gave Paine out caught behind in the last Test in Melbourne.

Paine felt the former Test paceman failed to take into account all the evidence at his disposal before instructing on-field umpire Paul Reiffel to overturn the initial not out decision. The Australia captain described the call as “extremely disappointing.”

“My concern was not with the technology, it was with the precedence that was set in the first innings with Pujara, and the fact I think the decision was made too quickly,” Paine said.

“[Wilson] didn’t look at enough replays to see the full evidence. There was probably a gap between bat and ball, the line (on Snicko) itself had started before it went past the bat.”

Paine has endured a difficult time with the DRS, and has a poor record of getting reviews correct.