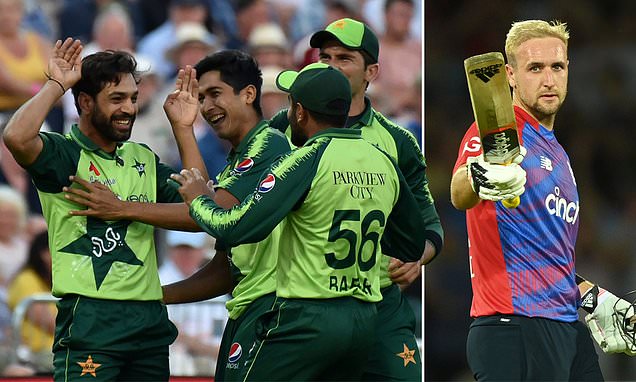 It was not quite a case of anything England’s reserves can do their big guns can do better. But it was the night a special talent announced himself with one of the great white-ball innings.

Liam Livingstone certainly cemented his place in the most destructive of all England teams with an extraordinary display of hitting on a record-breaking night at Trent Bridge.

But it was not quite enough to earn victory as Pakistan hit back from the embarrassment of their 50-over demise to pull off a thrilling 31-run win. 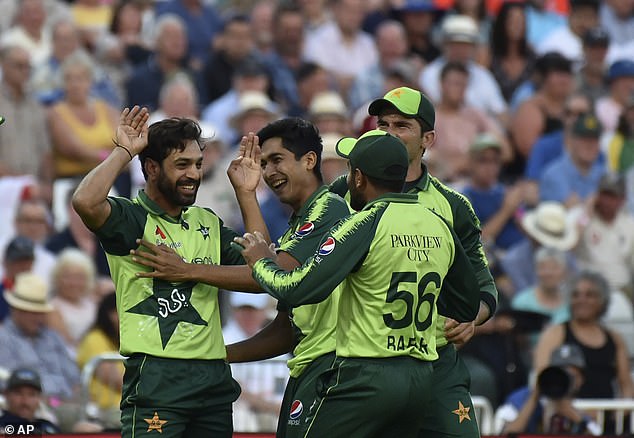 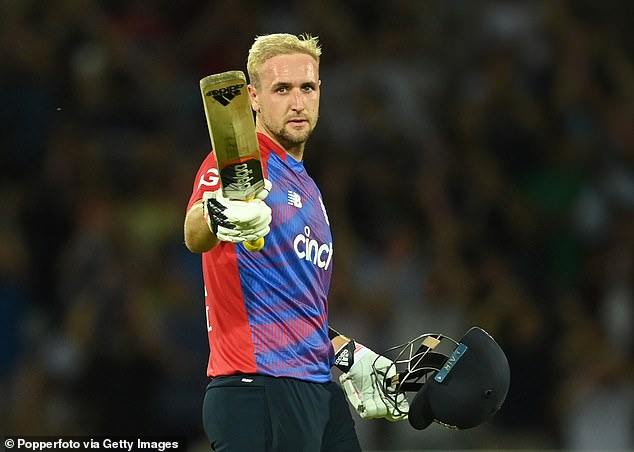 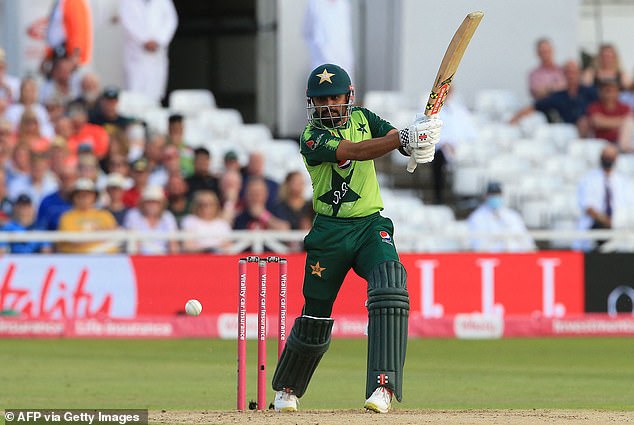 Pakistan captain Babar Azam got his team off to a strong start, hitting 50 runs off just 35 balls

Livingstone’s explosive 103 off just 43 balls looked to be taking England to the highest successful chase in their Twenty20 history after Pakistan had smashed 232 for six.

It was firstly the fastest 50 for England in T20 cricket, off just 17 balls, and became their quickest hundred in any format when he stormed to three figures off 42 deliveries. That defeated Jos Buttler’s record off 46 balls, also against Pakistan in an ODI, six years ago.

And even though it ensured England’s near first choice side, returning from the quarantine that ruled them out of the 3-0 50-over win, made a spectacular start to this series it did not get them off to a winning one.

This was quite incredible from Livingstone, complete with his peroxide blonde Phil Foden type look, who is now certain of a place among England’s plethora of world-class white-ball batsmen at October’s Twenty20 World Cup.

But it was not enough to take England over the line as the Lancastrian fell to Shadab Khan the next ball after reaching his century trying to hit what would have been his 10th six. It was the decisive moment of an action packed night.

That left England still with 49 to get off 21 balls and even though David Willey hit 16 off 11 they could not quite do it, being bowled out for 201 with four balls to spare. 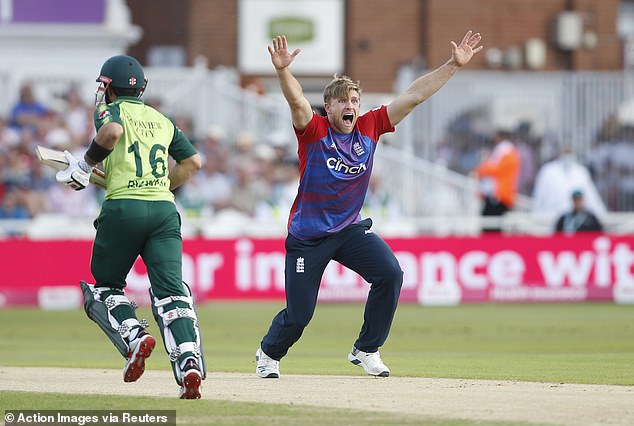 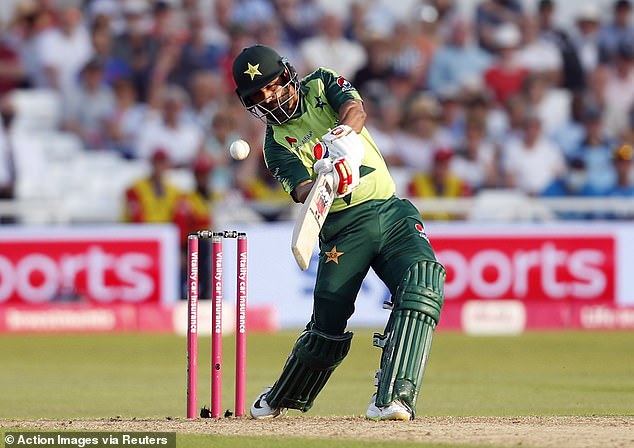 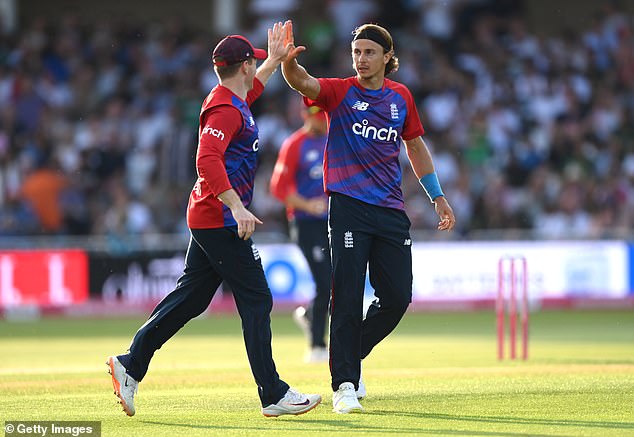 Pakistan’s pride restored and England left with a fight on their hands in their last T20 series before they name their provisional World Cup squad in September.

‘Only Liam really got going in the chase,’ said returning England captain Eoin Morgan. ‘This is Pakistan’s day. They put our bowlers under pressure and then bowled well themselves.’

It was another run-laden Trent Bridge pitch that provided the perfect stage for a demonstration of brutal hitting from both sides that thrilled a 17,000 full-house.

Pakistan’s latest bunch of wounded tigers were always likely to provide stronger resistance after the 50-over team were thrashed by England’s hastily assembled ‘C’ team.

And it was no surprise it was Babar Azam who propelled them to Pakistan’s highest score in T20 history and the third highest short-form total by anyone against England.

Not that it started well as the Pakistan captain came within centimetres of being caught by Dawid Malan at slip off Willey in the first over. 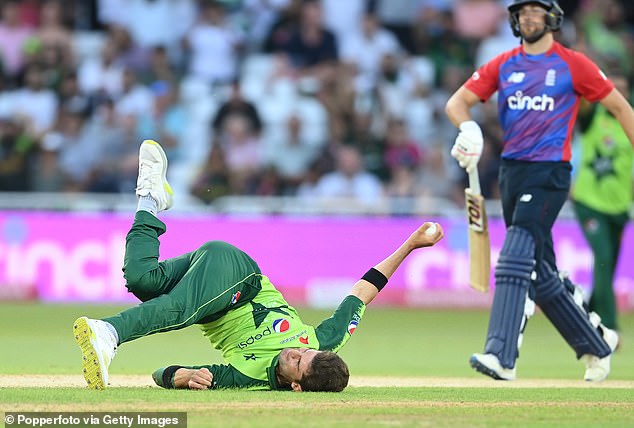 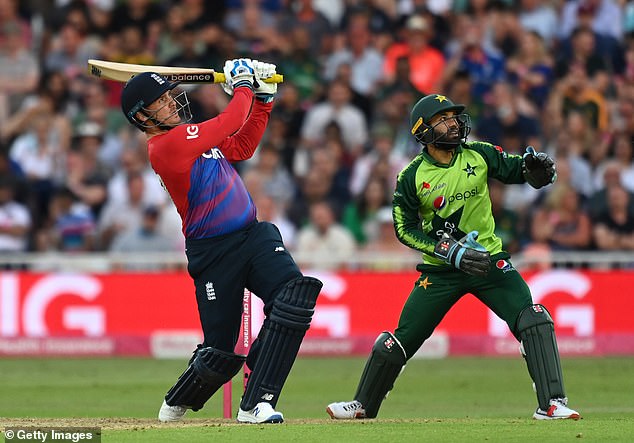 But once he had taken Willey for three successive fours Babar was off and running and provided another sublime display of the skills that have made him one of the world’s best white-ball batsmen.

By the time Babar, who made 150 in a losing cause in the third ODI at Edgbaston, was caught by Jonny Bairstow off Willey he had smashed 85 off 49 balls with three sixes.

There were also three sixes in a Saqib Mahmood over from Fakhar Zaman as Pakistan made the most of the start given them by Babar and Mohammad Rizwan with an opening stand of 150 in 14.4 overs.

Morgan had said this would be England’s last chance to experiment before October’s T20 World Cup, with death bowling still something of a cause for concern.

So it was intriguing to see England include both Tom Curran and Mahmood, the star of ‘Ben’s Babes’ 50-over squad, in what appeared, with Chris Jordan left out, something of a death-overs shoot-out.

Neither could claim to have excelled over the other, both disappearing at more than 11 an over, but at least Curran took two wickets to Mahmood’s one. 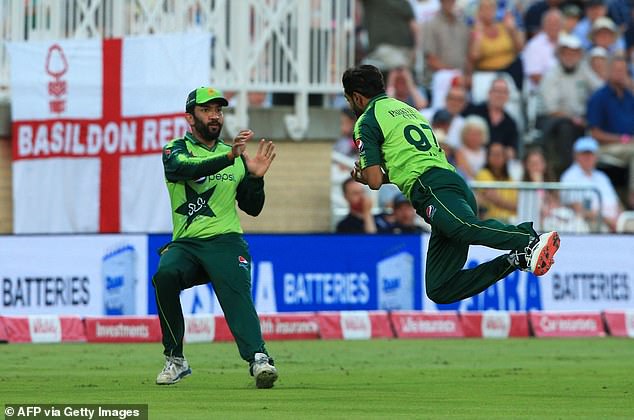 Moeen Ali also fell cheaply, caught by Haris Rauf (right) who then collided with his team-mate 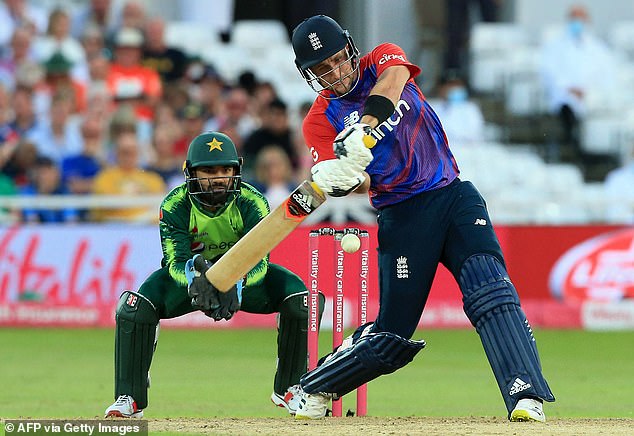 There were equally chastening figures for Matt Parkinson, given his chance ahead of the rested Adil Rashid, who conceded just 11 runs in his first two overs but 36 in his final two.

At least he got a bowl. Moeen Ali was ignored again with the ball by Morgan, who preferred Livingstone’s assortment of off and leg-breaks, and then fell for just a single after being promoted to four in the order. Another forgettable night for an important player in worrying decline.

But even in defeat this was an unforgettable night for England thanks to Livingstone. ‘It was an incredible knock from Liam,’ added Morgan. ‘Over the last six years we’ve seen some amazing innings from people like Buttler, Roy and Ali but this was as good as any of them.’

Now England have to quickly regroup before the second match at Headingley on Sunday and the third at Old Trafford on Tuesday if they are not to suffer a rare white-ball home defeat. But it was a night that Livingstone will never forget.