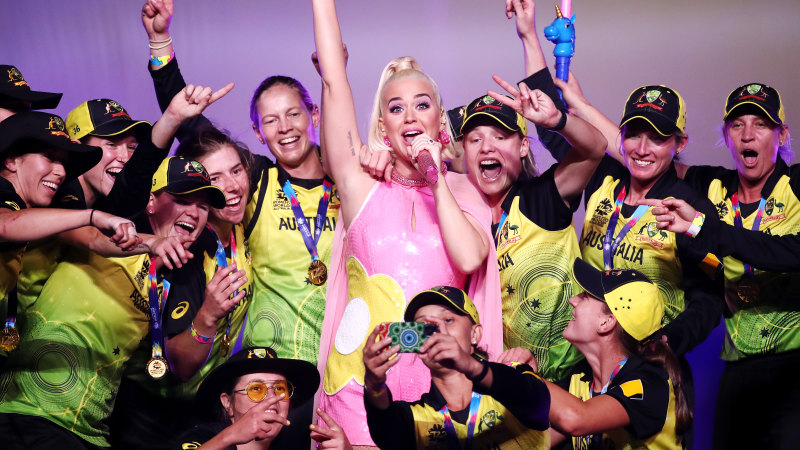 Word of the year

$300m. Spoken, it's not quite one word but it is on the word counter. Where there is a will, there is a way. Cricket Australia has pooled all its energy into saving its season, worth about $300 million to the organisation. 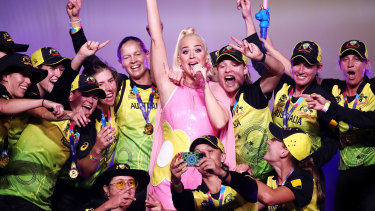 Katy Perry with the triumphant Australian team after they won the T20 World Cup final at the MCG.Credit:Getty Images

Saved by a break in the weather on semi-final night, the host nation destroyed India in front of 86,174 fans, just short of the world record for a women's sporting event of 90,185. The post-match celebrations on stage with pop megastar Katy Perry will forever be synonymous with a momentous occasion for women's sport in this country.

England became the first country to host international men's cricket during the pandemic, averting financial catastrophe by getting away a full fixture list without major incident. The England and Wales Cricket Board was still forced to cut 62 jobs amid fears of losses up to £200 million ($356 million) if there are further disruptions in 2021.

Despite another year of tumult, Cricket Australia could also come out of the year better than expected should the virus not spread far beyond Sydney's northern beaches and allow the rest of the Tests and Big Bash League to be played out.

Kevin Roberts. The early days of COVID-19 were not a good time to be the boss of a major sport – and so it proved for the Cricket Australia chief, who was given his marching orders in June after putting the players, states and his own staff offside with his handling of the pandemic. 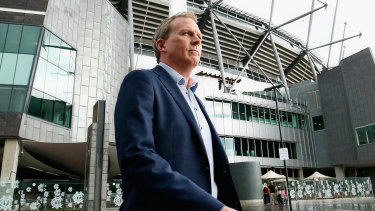 Kevin Roberts lost his job as Cricket Australia chief executive in June after weeks of turmoil.Credit:Getty

Roberts argued the game was not immune to the financial crisis that had beset the global economy but his critics disagreed.

Western Australia. The state is set to miss out on international men's cricket for the first time since 1976-77, due in part to its government's hardline stance on its border and a calendar squeeze brought about by the rescheduled Indian Premier League. There is, however, speculation Perth could host a Test against South Africa should a tour of that country be scrapped.

Rachael Haynes. The national vice-captain was integral to Australia's T20 World Cup triumph and led the Sydney Thunder to the WBBL title, but the star batter missed out on a once in a lifetime opportunity to party on stage with Katy Perry. The reason? She was having a drugs test.

Now the national men's side has cleaned up its act, the stinks involve those in suits instead of the creams.

Cricket Australia and its free-to-air TV partner Seven West Media are in a scrap over the network's $450 million deal.

Seven is arguing it has not been given what it bought, pointing to the dramatically different 2020-21 schedule. CA says the deal stands as it will deliver a full season.

Unfortunately for the sport, the issue is not being played out behind closed doors, with Seven boss James Warburton firing shots in the media. The case has now headed to the Australian Centre for International Commercial Arbitration (ACICA) and will be before the Federal Court in March.

Man of the year

Pat Cummins. He is a broken bone or dodgy hamstring away from becoming the first frontline quick to captain the Test side since 1956. The speedster's appointment as vice-captain for all three teams suggests he has the inside running to succeed Tim Paine and/or Aaron Finch, though they are still going strong so a decision on a long-term successor is still some time away. 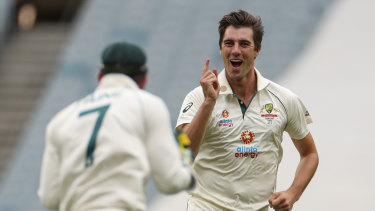 Woman of the year

Alyssa Healy The Australians have a mantra of fearless cricket no matter the situation, though did not always live up to that aspiration during the T20 World Cup. They did in the final, as Healy set the tone with a boundary off the first ball on her way to an explosive 75 off 39 balls. How India must rue dropping her in the first over. 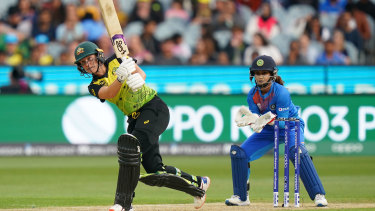 Alyssa Healy was the match-winner in the T20 World Cup final.Credit:AAP

Viral moments of the year

Flat tracks, shorter boundaries and bigger bats; it's a tough life being a bowler, even tougher now using saliva to shine the ball is banned due to COVID-19. Sweat is still permitted, though Cricket Australia implemented tougher guidelines than the ICC, disallowing sweat from the face, neck or head.

Glenn Maxwell flushed a 100-metre switch hit in December in Canberra, sparking debate as to whether the shot, which requires a batter to change from a right- to left-hander (or vice-versa) is fair.

Quote of the year

"We could send the cameras down for free to telecast grade cricket." – Seven West Media chief executive James Warburton is unhappy with the quality of the Big Bash League.

Australia regains the Border-Gavaskar Trophy with a thrilling victory in the fourth Test but the men's T20 World Cup eludes them after they lose the final to host nation India. There are biosecurity issues with the team's return to Australia, delaying the start of the Ashes, which it wins 4-0, prompting captain Tim Paine to play on for another year. Meg Lanning's all-conquering team scrapes home against a determined England to hold on to the urn as Phoebe Litchfield announces her arrival on the international stage.

January 1, 2021 Сricket Comments Off on Cricket year in review: Bubbles, troubles and a momentous night for women’s sport
NFL News