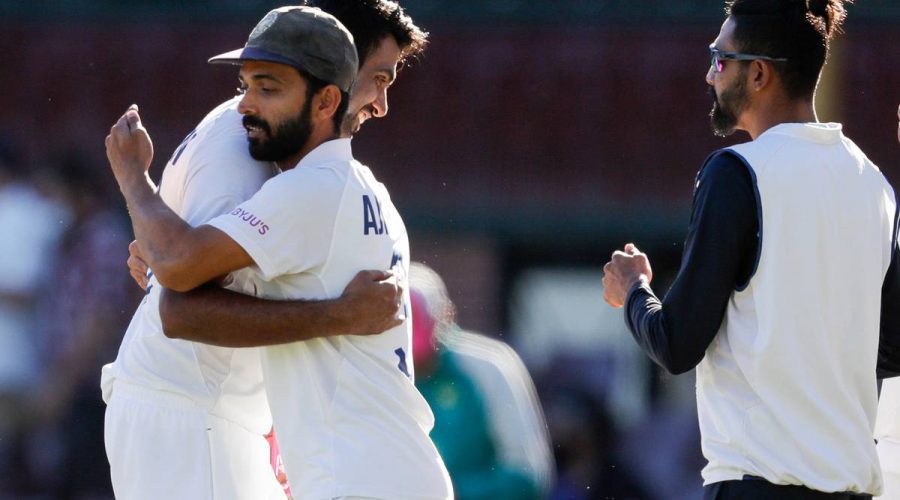 India pulled off one of the great test cricket escapes, clinging on for a draw on the final day of the third test against Australia at the Sydney Cricket Ground.

While their eventual finishing score looks routine – finishing five wickets down – it belies the incredible resistance shown by the Indian batsmen to keep the series tied at 1-1.

With three genuine tail-enders and an injured Ravindra Jadeja the only batsmen left, Ravichandran Ashwin and Hanuma Vihari put together an epic unbeaten 258-ball partnership – scoring only 62 runs – to set up a series-deciding showdown in Brisbane.

Ashwin, who was given out but successfully overturned the caught-behind decision, was hit on the body by a short ball and survived a dropped catch but finished unbeaten on 39 from 128 balls. Vihari, struggling with a hamstring strain and unable to move freely, faced 161 balls for his unbeaten 23, getting a late reprieve when he edged Mitchell Starc and Australia captain Tim Paine put down a catch behind the stumps.

Having resumed the day at 98-2 chasing 407 to win, Australia looked set to cruise to victory when spinner Nathan Lyon removed stand-in India captain Ajinkya Rahane (four) in the second over.

However, the Australians didn’t take another wicket in the opening session as Rishabh Pant went on the attack. The injured Pant dominated a century fourth-wicket stand with Cheteshwar Pujara that gave India hope of an unlikely win.

Pant, who shrugged off an elbow injury that kept him off the field for the entire fourth day and moved up the order to bat at No 5, had some early chances and then was particularly harsh on Lyon as he hit three sixes and 12 boundaries to get within one shot of a century.

He was out trying to reach triple figures in that vein, advancing to Lyon and squeezing a thick outside edge to gully, where Pat Cummins took a catch low to the ground to make the score 250-4.

Pujara, who passed 6000 test runs during his innings, took up the attack and hit Cummins for three straight boundaries to start the third over with the new ball.

But his defiant 205-ball innings ended when Josh Hazlewood beat the outside edge and took out off stump, reducing India to 272-5 with 43.4 overs remaining.

At that point, slim hopes of survival looked India’s best chance, as opposed to pushing for victory.

Remarkably, against the odds, Ashwin and Vihari saved the day – and the test.

Here’s how the final day unfolded: