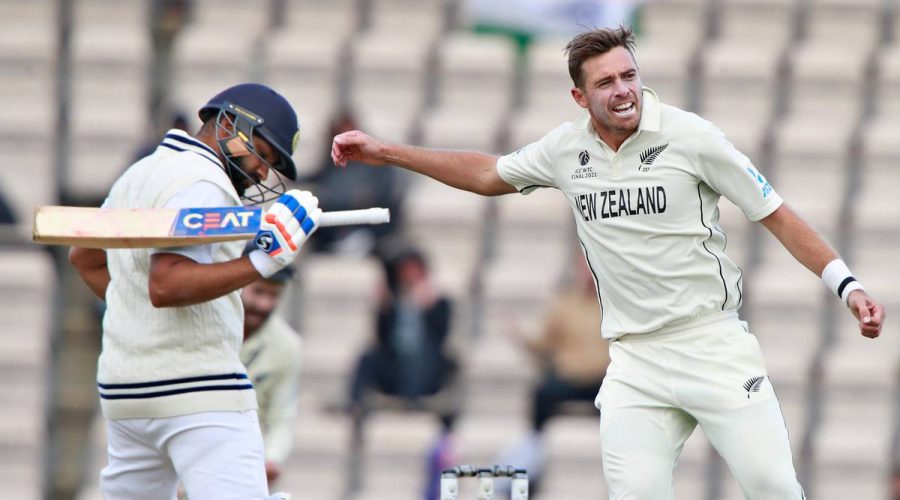 Three takeaways from day 5 of the World Test Championship final between the Black Caps and India in Southampton.

Report: Black Caps and India with all to play for in final day

India are effectively 32-2 with 98 overs remaining.

The final day is expected to offer the best weather of the match and, to work hand in hand, the best batting conditions.

With that in mind, it is really difficult to see how India can confidently set New Zealand a target, particularly with two of their most fluent strokemakers in Shubnam Gill and Rohit Sharma back in the hutch.

At the risk of tempting fate that would seem to mitigate against India batting for anything other than survival on the final day, particularly if they lose Virat Kohli or Cheteshwar Pujara early. Because Kohli is a bona fide genius, you can’t rule it out entirely, but the odds will be long on a declaration.

That means the only realistic way New Zealand wins is if they rip through the remaining eight Indian wickets within the first 50 overs (perhaps 55 at the outside) on the final day.
Working on these same assumptions, the only way New Zealand loses is if they lose quick wickets in pursuit of a limited-overs target and cannot arrest the slide.

In other words, there’s still plenty of intrigue left, even if the odds are stacked in favour of a draw.

In years to come scholars will debate the merits of Kane Williamson’s Boycottian approach to run gathering at the Hampshire Bowl. For what it’s worth, this “scholar” believes the answer will rest somewhere sadness and admiration, with a heavy weighting towards the latter.

The admiration will be allied to acceptance that batting was uncommonly difficult after rain and cloud cover around Southampton left the surface susceptible to the charms of the Dukes ball throughout the first five days; sadness because some of the world’s great batsmen, Williamson among them obviously, were unable to give full expression to their repertoire of shots.

If ever the Steady the Ship motif was appropriate for the captain, this was it. While the optimistic among us were taking at the start of play about potential routes to victory, Williamson had charted a different course. Having been at the crease on the evening of day three, he had determined that batting on this wicket was more suited to the tradesman than the artist and adjusted accordingly.

In its own way his innings, hampered also by a niggling elbow injury, was excellent, though never breathtaking.

It was the perfect case study for how conditions determine the spectacle. He is not a slow scorer, having come into this test with a strike rate of 52. To give an indication of the struggle, Williamson played on some green tops in the last New Zealand summer yet after 177 balls he had 78 against the West Indies at Hamilton (he’d go on to 251 off 412); and 112 against Pakistan at Hagley Oval (238 off 364).

The closest comparison to the 49 he scored off 177 in Southampton was the 58 he had scored at the same stage against Pakistan at Mt Maunganui. On that occasion, he upped his rate significantly to score 129 off 297. That was never going to happen in the WTC final.

Two days ago these same Takeaways made note of the sheer brilliance of BJ Watling’s first innings performance behind the stumps.

This author has also been firmly in the camp of those who think he is leaving the international arena at precisely the right time. His brief appearance in the middle last night only bolstered that belief.

It might sound harsh, although it is only meant in deference to what has come before, but it has become genuinely hard to imagine where Watling’s next score is going to come from. With all the will in the world, it has become a painful grind at the batting crease for one of the country’s greats.

Last night was tailormade for the version of Watling we love: tough surface, brilliant attack, tricky game state. Watling missed a straight one by a mile.

The doughty Watling will be forever remembered as one of the most pivotal figures in New Zealand’s rise to cricket royalty. He should also be remembered as a guy who took his bow at the right time.

Tom Blundell is ready; he’s following in the footsteps of a diminutive giant.