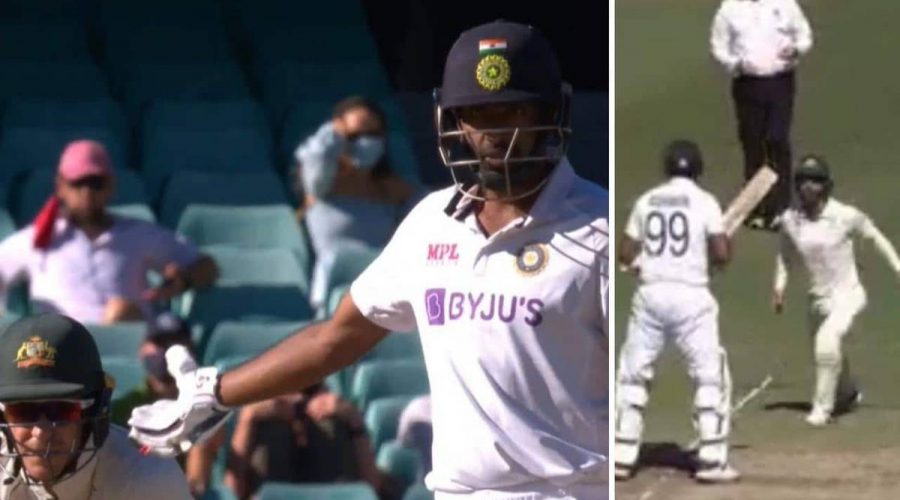 As Australia’s hopes of a win in the third Test against India faded away, the side was slammed online for acts of intimidation as they tried to get under the skin of the Indians.

As Hanuma Vihari and Ravichandran Ashwin played out a 40-over stalemate to keep the Border-Gavaskar series alive for the final Test, the Aussies were increasingly frustrated.

But it was Australian captain Tim Paine who went hard with the verbal barrage as he was caught on the stump microphones calling Indian rival Ravichandran Ashwin a “d***head” on day five of the New Year’s Test.

During Monday’s evening session at the SCG, Nathan Lyon was bowling to Ashwin with the Australian fielders chatting around the bat.

But what started as harmless banter soon took an ugly turn as the chances of an Australian victory slipped away.

When Ashwin pulled out of a delivery as Lyon was halfway through his run-up, Paine said: “We can’t wait to get you to the Gabba, Ash.”

Ashwin quickly responded: “Just like we want to get you to India. It’ll be your last series.”

Paine shot back: “Maybe, are you a selector here as well? At least my teammates like me, d***head I’ve got a lot more Indian friends than you do. Even your teammates think you’re a goose. Don’t they. Every one.”

The remarks spurred Ashwin to pull out of another Lyon delivery, which evoked a chorus of boos around the ground.

Paine replied: “I can talk all day mate. You wait until you get to the Gabba pal.”

After the next ball was bowled, Paine targeted Ashwin once again.

“How many IPL teams wanted you when you asked every single one of them to have you?” Paine continued.

“If you captain, ‘Oh coming from captain’,” he added with a mocking accent.

But Australian great Mike Hussey said it was “tactics, trying to put Ashwin off his concentration”, adding that it was a sign of desperation.

Indian legend Sunil Gavaskar was less kind in his assessment.

“It’s ridiculous. It’s unnecessary. What he said he’s got more friend than Ravichandran Ashwin is unwanted and unnecessary,” Gavaskar said on Channel 7.

The remarks soon came back to haunt Paine, as he dropped a catch off Hanuma Vihari the very next over.

While the Indians were being pummelled throughout the day as Australia banged it in short, Wade came underfire for seemingly mocking the visitors injuries as he fielded in short leg.

There was vision of Wade when he was fielding in close and knocked down a ball he appeared ready to charge the batsman before stopping to pick up the ball.

As his teammates patted him on the back, he mocked falling down injured.

On Channel 7, Michael Slater took aim at the move from Wade.

“I mean, Wade’s just saying, look, I’m tough, I’m in here, I’ve been hit and I’m going to stand tall,” Slater said. “You heard the batsman apologise for hitting him and he was making a step towards the batsman. I just think settle down, it’s a tough position. He is getting hit. I don’t go for this advancing towards the batsman when he is apologising for hitting you.”

Fans were quick to slam the Aussie’s intimidatory tactics.

The fourth and final Test will be juicy.

Vihari and Ashwin survived more than 40 overs at the crease together, denying the Australians a comfortable victory.

January 11, 2021 Сricket Comments Off on Cricket: Australia slammed for ‘over the top’ antics against India after Tim Paine’s sledging and Matthew Wade’s mocking
NFL News