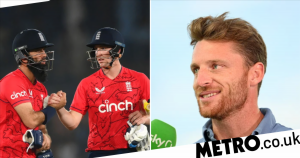 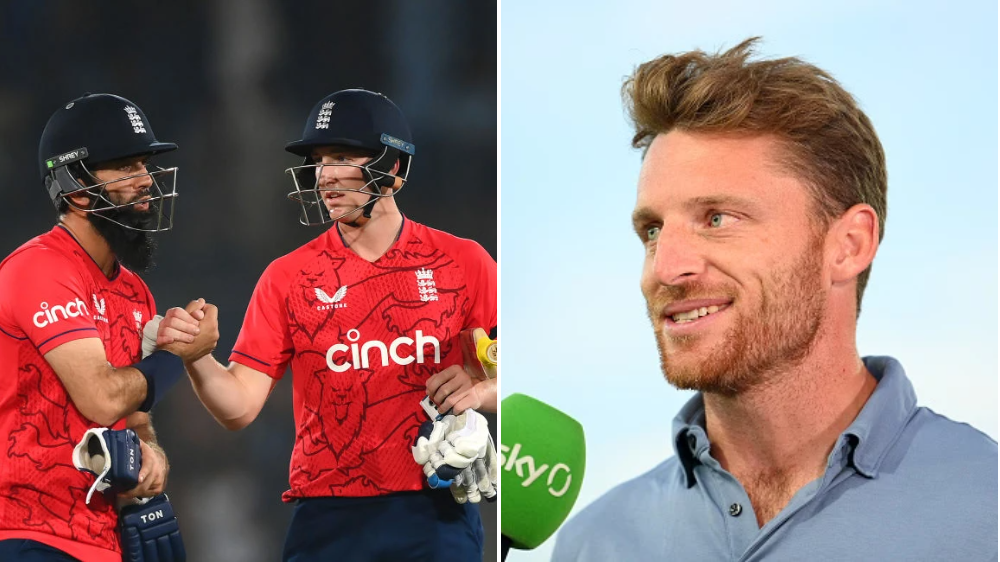 Jos Buttler says England will be a ‘dangerous’ opponent at the upcoming T20 World Cup even though they are ‘by no means’ favourites.

England will attempt to win their second T20 World Cup title when the competition starts in Australia next month.

Buttler’s side are currently No. 2 in the ICC T20 rankings but are going through something of a rebuild, having seen their long-standing captain Eoin Morgan retire over the summer and Matthew Mott come in as white-ball coach.

‘I think this World Cup coming up now is actually a bit of a free hit for us, it’s very early in our time as a team.

‘We’ve got a squad full of match winners and I think that’s an exciting place to be as a T20 team looking ahead to that World Cup.

‘We by no means go there as favourites, but I feel like we’ll be a dangerous team that sides wouldn’t want to play against.’

England face Pakistan in a seven-match T20 series before travelling to Australia to compete in the eighth T20 World Cup.

Wood took three wickets to help restrict Pakistan to 158-7, after Mohammad Rizwan (68) and Babar Azam (31) put on 85 for the opening partnership.

Hales, making his first international appearance in three years, scored 53 and Harry Brook made 42 not out as England won their first match in Pakistan since 2005.

Nottinghamshire opener Hales, who was called up after Jonny Bairstow’s injury, said: ‘It’s a very special feeling to get back out on the park for England – three years felt like forever but to get a fifty on my return in a winning team is the stuff dreams are made of.

‘There are always nerves and pressure after having not played for England for three years, it felt like a debut again, so a very special night.

‘I’ve spent a lot of time in Pakistan over the last few years and it means a lot to me so to be part of the first England tour here in such a long time is an incredibly special feeling.’

England captain Moeen Ali added: ‘A brilliant performance overall. We pulled it back well in the middle overs and at the death with the ball. Credit to our bowlers, they set it up for the batters.

‘Luke Wood got crucial wickets for us. He was outstanding on his debut, stuck his chest out and bowled well along with Adil Rashid. It wasn’t easy for the batters coming in.

‘We were smart with how we chased it down. Alex Hales showed how good he is, having come back in after a long time. Harry Brook showed a lot of confidence and that looks great for the future.’

Pakistan skipper Babar, meanwhile, said: ‘England planned well and started the bowling off with some pace so we need to give them credit for that, but also our batsmen need to step up.’

The second match between England and Pakistan takes place at the same venue on Thursday.