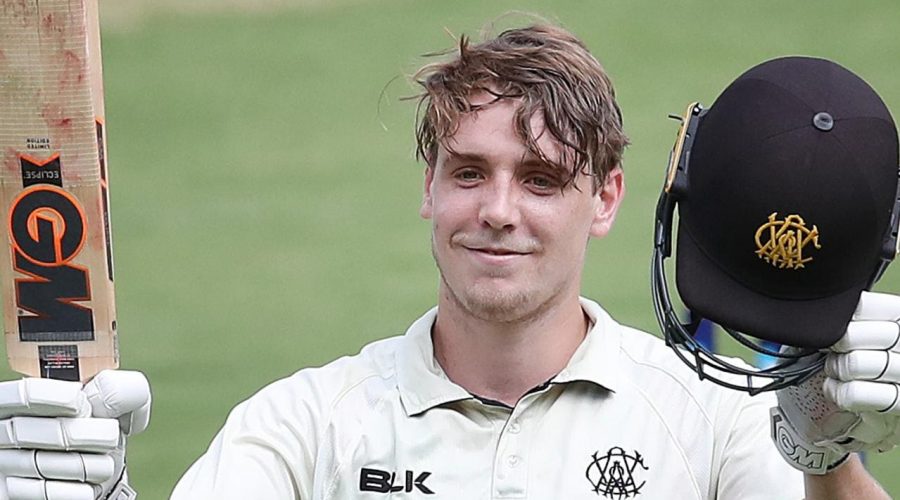 At just 21, Green averages 53.90 in the Sheffield Shield and has piled on the runs since his debut, earning a berth in Australian side.

While he didn’t set the world on fire at the next level, Green’s 84 in Sydney and some helpful contributions made it clear he was set for a long career in the Baggy Green.

Although touted as an all-rounder, his bowling has taken a back seat to his batting, and since returning to the Sheffield Shield, Green has dominated.

With 168 not out and a duck against South Australia in the last Shield game and 144 in the one-dayer also against SA, and a double century in Premier Cricket, Green continued the rich vein of form against Queensland at the Gabba.

Before the summer, Greg Chappell called Green “the best batting talent I’ve seen since Ricky Ponting” and he continues to deliver.

Cameron Green is big, strong and set to play for Australia for a long time.Source:Getty Images

While some were unimpressed by his rookie output in Test cricket with 236 runs at 33.71, Green is proving to be an irresistible prospect for Australian cricket.

He raced from 41 to 101 in just 47 balls in a stunning acceleration and WA coach Adam Voges said it’s something Aussie cricket fans should get used to.

“I think it’s just the evolution of his game,” said WA coach Adam Voges. “As he plays more, as he gets more confident in his own ability, I think you’ll see that (acceleration) a little bit more.

“He would’ve taken a lot of confidence out of his one-day hundred the other day where he was able to (move through the gears quickly). But he was able to put some real pressure on the Queensland bowlers and made their margin for error really quite small.”

Cameron Green is batting ridiculously well. Enters at 2-16 & hasn't given a chance reaching 144 not out. He's expanding now as well, marching at the spinner & smashing Kuhnemann into the top deck. Ably assisted by S Marsh who has half as many runs from just as many balls faced.

Cameron Green has just gone past 1000 first-class runs for the season (WA, Aus A, Australia).

Another ton for Cameron Green. Third in two weeks. Two in Sheffield Shield, one in 50 over.

Not bad from the Aussie all-rounder. Shame it came against Queensland. #Cricket

Cameron Green is batting ridiculously well. Enters at 2-16 & hasn't given a chance reaching 144 not out. He's expanding now as well, marching at the spinner & smashing Kuhnemann into the top deck. Ably assisted by S Marsh who has half as many runs from just as many balls faced.

But despite plundering the bowlers, one of the best aspects of Green’s rise is that he isn’t even the leading run scorer in the Sheffield Shield — although another 45 runs tomorrow will push him to the top of the ladder.

The current leader is South Australia’s Travis Head, who was dropped after the Boxing Day Test but has come back with a vengeance in first-class cricket.

It’s another great sign for Australian cricket as the side looks to ease the headache of the flimsy middle-order, an affliction that has haunted the side for some time with little success for multiple combinations.

Travis Head is back in the runs.Source:Getty Images

223 against WA in the first four-dayer back, followed by 142 in the following one-dayer has the 27-year-old Head banging at the door when the next Test comes around — likely the Ashes in Australia at the end of the year.

Before then, Green and Head appear to be in a race for 1000 Shield runs, joining just four other players in the past decade.

Race to 1000 Shield runs between Cameron Green and Travis Head?

Only four players have done it in last 10 years and this is a shortened season: Harris, Wade, Klinger, Voges#SheffieldShield

He scored 64 before being trapped by Nathan Lyon in the Shield clash against NSW.

Equally good is Alex Carey’s form, as the presumed successor of Tim Paine as Australian Test wicketkeeper reaching 86 not out at stumps in South Australia’s score of 4/298.

A century is in the offing for Alex Carey.Source:Getty Images

It comes after Head took on a suggestion from Justin Langer to open his stance with South Australia’s General Manager High Performance Tim Nielsen revealing the change to cricket.com.au.

“It was the way he picks the bat up, and the way he was setting up,” Nielsen said.

“The bat was pointing almost straight back over middle stump in his stance, rather than him being a bit more relaxed with his bottom hand.

“Then, because of the way he naturally cocks his right wrist, the bat almost flays out or opens out a bit towards first slip.

“So by not picking up the bat so much under his left elbow, and having him raise it more towards first slip, the feeling was he’ll get a bit more access to a pull shot, or to balls coming into him from a right-arm bowler towards his leg stump.”

While there is plenty of time before the Ashes, Australia could have found a solution to the nation’s middle order woes.