Australian fans have seen the full spectrum from Virat Kohli. From the brash 23-year-old who on his first visit flipped the bird to the SCG crowd, to the captain of the game's biggest nation who won admirers the cricket world over for his plea with fans to cheer instead of jeer Steve Smith.

The battle between the devil on one shoulder and the angel on the other is best illustrated thus: he was bestowed with the ICC's Spirit of Cricket award at a time when he was one demerit point away from an international suspension. 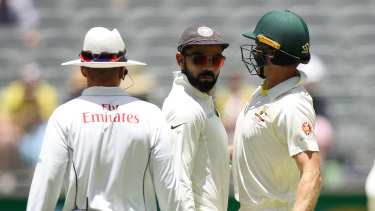 Virat Kohli and Tim Paine will resume hostilities when the first Test starts on December 17.Credit:Getty

He knows how to get under the skin of the Australians. In the fiery tour of 2017, his claims of systemic cheating of the DRS by Smith prompted then Cricket Australia chief James Sutherland to issue a statement slamming Kohli’s comments as “outrageous”. His argy-bargy with Tim Paine in Perth two years ago left Justin Langer bemoaning the "double standards" at play in regards to the expectations of Australia's behaviour after the ball-tampering scandal.

Yet, weeks later after he became the first man to lead India to a series win in Australia, Kohli spoke with decorum and grace, saying the historic victory would inspire kids to want to play cricket for their country.

Luminaries of the game from Glenn McGrath – whose charity is synonymous with the Sydney Test – to former leading umpire Simon Taufel have noted Kohli's humility.

Former Australia captain Mark Taylor recalls a story from the 2014 series where Kohli extended beyond the alotted time an interview at Adelaide Oval that had been interrupted for several minutes by the ground's PA system.

"That showed to me he's a guy who thinks about the game and not about himself," Taylor says.

Accepting the notion Kohli could be the most powerful figure in the game, Taylor believes it's a title that sits well with the player.

"I think he treats that responsibility with great respect," Taylor says. "He's still very much his own person when you watch him play.

"I've always found him in the times I've spoken to him to be very respectful to the game and those playing it and those who have played it.

"I think he is a very powerful guy in world cricket, but I think he does a very good job to walk that fine line in being an aggressive cricketer and also a statesman. I think he's doing it very well." 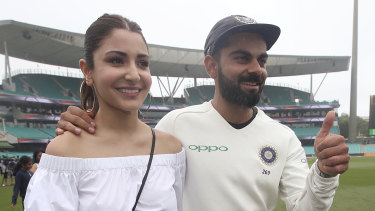 Virat Kohli is returning home after the first Test to be with his wife, Anushka Sharma, who is due to give birth to their first child in January.Credit:AP

The change in Kohli has come after a period during which his power in Indian cricket grew significantly.

His relationship with coach Anil Kumble, under whom he played as a youngster with Royal Challengers Bangalore in the IPL, became so strained that the former leg-spin great stood down despite leading India to the top of the world Test rankings.

The dressing room was not big enough for two powerbrokers. The acrimony behind the scenes came to light in an email leaked to Cricinfo in which Kumble described his partnership with Kohli as "untenable", writing the "captain had reservations with my 'style' and about my continuing as the head coach".

Speaking on the condition of anonymity, a source then holding a high position at the Board of Control for Cricket in India said players were uncomfortable with Kumble's unilateral decision making.

Under the current set-up, coach Ravi Shastri manages behind the scenes, but Kohli calls the shots.

Kohli will play the white-ball series and the first Test before he returns home for the birth of he and wife Anushka's first child, a decision for which he has been applauded.

'He always pushes the boundaries, but that's what great players do. He wants to win every game.'

Unfortunately for cricket lovers, the man who has come to define recent Border-Gavaskar series will be gone for the season's major fixtures. He and Paine may as well say hello and wave goodbye when they meet at the coin toss in Adelaide.

Former Australia coach Darren Lehmann is expecting Kohli to be invested in the first Test even if he is not seeing out the series.

"That's just the way he plays; he plays full of energy and doesn't want to lose," Lehmann says. "He always pushes the boundaries, but that's what great players do. He wants to win every game. That was one of the more fiery ones [2017 series] going around in recent years."

While former captain Michael Clarke fears Kohli's absence from the showcase series as a "massive punch in the face" for Test cricket, Chappell believes the game will be strong as long he is at the helm.

"He loves Test cricket and while he's playing India will treat Test cricket with respect because he has a big say in Indian cricket. That's a good thing," Chappell says.

November 14, 2020 Сricket Comments Off on Behind the mask, which Virat Kohli has arrived in Australia?
NFL News