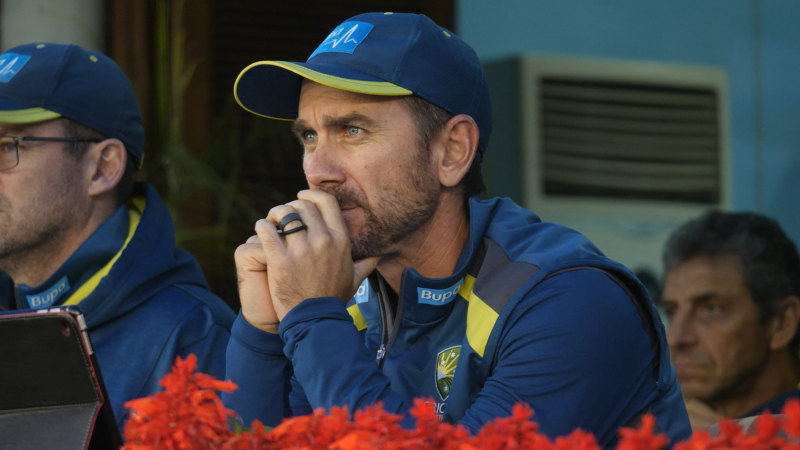 You must go back 18 months and six Melbourne lockdowns to find the last time Australia’s national men’s team won a series other than those of the one-day international variety. That was a 2-1 Twenty20 success in South Africa, made memorable by a hat-trick for Ashton Agar.

Since then, the teams coached by Justin Langer have lost five in a row: to England, India, New Zealand, West Indies and now Bangladesh. They also lost their only Test series in that time, at home to an injury-depleted India.

Wins in ODI series against England, India and West Indies share a common thread. This is the format in which a world title is the furthest away. The next World Cup is not until 2023. As far as the 50-over game is concerned, Australia’s competitors are currently looking elsewhere. 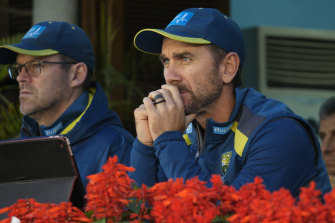 Justin Langer: questions need to asked, his contract expires in the middle of 2022.

In Test cricket, in which Cricket Australia ranks itself most keenly, the loss to India and cancellation of a South Africa tour meant Australia missed the World Championship final this year. And in T20Is, a couple of months out from the first of two World Cups in as many years, Australia has lost series irrespective of whether they have their full side in or not.

Accountability for this run of results, adding up to 15 defeats in the past 21 games, is unclear. Australia’s team performance wing is headed by Ben Oliver, with Langer’s close friend Gavin Dovey serving as the long-time team manager on the road.

Over the past 18 months, they have been consumed by the task of scheduling and completing bio secure series. Bubble fatigue, of course, deprived Langer of David Warner, Glenn Maxwell and Pat Cummins, to name three key players on this two-legged tour.

But beyond the many and varied excuses that have and will be raised – missing players, difficult conditions, the contrasting challenges posed by the West Indies and Bangladesh teams, or the absolute priority of the Ashes Tests at home – an essential truth remains. Australia is in the middle of a decline closing in on two years’ duration.

Many of these issues will need to be tackled in deciding if Langer’s tenure extends beyond the expiry of his current contract in the middle of 2022. They will also figure in talks about captaincy, given that both the Test skipper, Tim Paine, and the white ball leader, Aaron Finch, are getting close to the finish line.

Thirdly, Australia’s system has now been for a couple of years operating under a new philosophy whereby the National Cricket Centre and the Australia A program were shunted behind the states as the chief sources of cricket development. The rest of the world has done the opposite.

For the moment, Australia and its new selection chair George Bailey will need to choose a squad that can contend at the World Cup in the UAE in October.

T20 is a format in which virtually every side in the world, apart from Australia, picks or recruits players for specific, well-defined roles. They generally use more spin bowlers than Australia have done, and they certainly do not stack their middle order with players who commonly ply their trade in the top three.

In Bangladesh, Australia started the series by indicating the acting captain Matthew Wade would bat in the middle order because that was where he’d most likely bat in the World Cup. By mid-series, floundering once more, he was pushed back up to the top alongside Dan Christian, a middle order specialist.

Meanwhile, the long and decent record of Mitch Marsh as a middle-order player of power and match-winning capability for both Australia and the Perth Scorchers was thrown out by the instinctive call to bat him at No.3. Marsh started with real aggression, but became more inhibited with each innings as he tried to hang onto a position he may not have expected to be given, also having to contend with more foreign conditions in Dhaka.

In the end, not much was learned about the few batters who will retain their spots when the bubble-fatigued group come back, other than that Marsh has added his name to an already crowded queue for the top order. Based on Wade’s record as a middle-order batter and his unvarnished glove work, it is difficult to justify retaining him for the Cup.

Instead, Australia has the option of calling up the uncapped Josh Inglis. Uniquely among aspirational players, Inglis moved from the top down into the Scorchers’ middle order last summer. Batting often alongside Marsh he showed, through proficiency against spin, he showed that he can handle the task.

Langer and Bailey will also have to decide on what to do with Steve Smith and Marnus Labuschagne. It is not clear whether Smith’s latest elbow complaint will allow him to be fit for the World Cup. Both he and Labuschagne are known for wanting lots of time hitting a red ball before Test match assignments.

Wade, to his credit, did not seek to deflect accountability for the team’s performances of late.

“As individuals I think we all have to self-reflect for ways to get better,” Wade said. “In the end, it’s up to the players to find a way to get better scores, and to bowl better and get the results for Australia. If we’re not looking at it like that, then we’re not learning.”

For broader judgments of the men’s national team, responsibility rests at the top. It is time for the CA board to ask some pertinent questions of Langer, Dovey and Oliver.