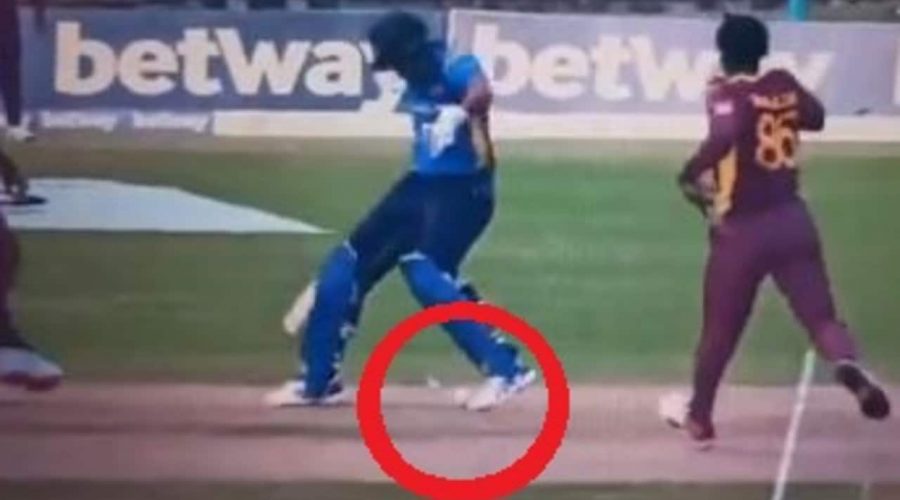 The cricket world is divided over whether or not Sri Lankan batsman Danushka Gunathilaka copped a raw deal after controversially being given out against the West Indies.

The Windies won the opening one-dayer comfortably by eight wickets, chasing down the visitors’ 232 with three overs to spare. But Gunathilaka’s dismissal was the big talking point after he was sent packing for obstructing the field.

Facing Kieron Pollard’s medium pace, Gunathilaka was on 55 when he blocked a ball that dropped at his feet. Not knowing initially where the ball went, the opening batsman set off down the pitch for a run, but quickly changed his mind and sent his partner back.

Gunathilaka then tried to backtrack into his own crease before Pollard, haring down the pitch in his follow-through, could pick up the ball and run him out at the striker’s end.

However, in the process of stepping back into his crease, Gunathilaka trod on the ball and it bobbled away from Pollard, preventing the bowler from attempting a run out.

Gunathilaka did look down at his feet to try and see where the ball was, but appeared not to see it before accidentally knocking it away.

Law 37. 1 states: “Either batsman is out obstructing the field if he wilfully obstructs or distracts the fielding side by word or action. In particular, but not solely, it shall be regarded as obstruction and either batsman will be out obstructing the field if while the ball is in play and after the striker has completed the act of playing the ball, he wilfully strikes the ball with: (i) a hand not holding the bat, unless this is in order to avoid injury. (ii) Any other part of his person or with his bat.”

The West Indies appealed and the decision went upstairs, where the third umpire concluded Gunathilaka wilfully kicked the ball with his foot, and gave him out.

It’s just the second time since 2015 a batsman has been given out obstructing the field in a one-day international.

Danushka Gunathilaka was given out for this 🤐pic.twitter.com/Vc6YIo6dCi

That should have been not-out! Gunathilaka didn't do that intentionally.#WIvSLpic.twitter.com/914OAWV0zk

The home team came under fire for a lack of sportsmanship, with many leaping to Gunathilaka’s defence and saying he couldn’t possibly have seen where the ball was, believing contact was unintentional.

The Windies were criticised for not withdrawing their appeal, even by some of their own. Former captain Darren Sammy said he wouldn’t have appealed, while ex-Australian star Tom Moody said Gunathilaka should have survived.

“Don’t think that was wilful at all. I wouldn’t appeal but hey,” Sammy tweeted, with some shrugging emojis.

Former Australian captain Lisa Sthalekar was on the same page. “Just saw it … oh please! Not out,” she wrote on Twitter.

Ex-West Indian fast bowler Ian Bishop was in commentary when the incident occurred, and was another who didn’t think Gunathilaka was in the wrong, even if he did glance down to try and see where the ball was.

“He does take a little glance down as he’s about to take that second step there, but I don’t know, I’m not convinced in my mind that he actually knew (where the ball was) when he glanced down,” Bishop said.

“It looks bad there, so that’s what the television umpire is seeing.”