As 21-year-old Don Bradman was romping towards 334 at Headingley in 1930, English luminary Sir Pellham Warner turned to his pal Lord Hawke and sighed: “This is like throwing stones at Gibraltar.” 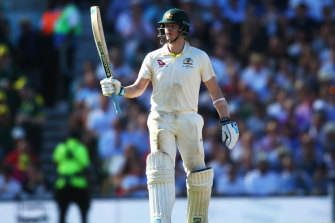 Steve Smith celebrates his 50 during day two of the fifth Ashes Test.Credit:Getty Images

It was during a short lull in his innings, in which he also played and missed a couple of times. Well, he is human, partly. He said he had the flu this day, as if to explain why he took so long and made so few. We thought his only corporal weakness was for runs. But we understood.

Smith did what he does. Ball after ball, he took up his broadside position. If it was wide of off stump, he drove or cut, both off the back foot, calypso style. If it was nearer to off, he blocked or left. If it was on the stumps, he flicked to leg. If it was short, he ducked or paddled. When Leach began to nag, he stiffened his arms and hit him far over mid-on for six. Leach nagged no more. Whatever it was, he was ready for it. Whatever it did, he dealt with it. He didn't misjudge. He didn’t miss. Pebbles, monolith.

Australia’s other batsmen, mere mortals, came and went, trying and failing to follow his example. Labuschagne again came closest, in imitation and effect. For two hours, they were as one, until at length Labuschagne tried to work Archer to leg and was plumb lbw. Sometimes, he ought to play a little less like Smith and remember that a ball on middle stump is a danger to most batsmen, an opportunity for the gifted few. When he strikes a happy medium, he will make the century that is now all that is missing from his CV.

Smith had no issue with DRS, as others did, because had no need for recourse to it. It’s there for those who make mistakes. Smith thought he had made one, once, when England wicketkeeper Jonny Bairstow made as if he was about to take off the bails as Smith stretched and dived for a third. He wasn’t. The ball was nowhere near. Smith had been goosed. He laughed. It was a fake mistake.

And then. Almost as if running up the white flag, England threw the ball back to Chris Woakes, its most innocuous bowler this day, and he aimed his first ball at the stumps, and it jagged a millimetre, and Smith … missed it. It turns out he does miss ‘em there, every four-and-a-half hours or so, Nasser. On Fridays the 13th. When he has the flu. Hallelujah, an answer: just bowl at the stumps, they cried. But England have tried that. Believe me, they have. 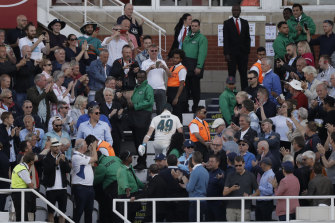 Steve Smith returns to the dressing room after he was dismissed by Chris Woakes.Credit:Getty Images

It just about sums up the series that for all Smith’s immovability, England finished the day in the better position, a winning position. Unable to break down Smith, they’ve at last broken Australia around him. It’s a hell of a lot, but it’s too late.

Let's update the Gibraltar analogy. It's 90 years old, and in any case, Gibraltar soon is going to be terribly isolated from the motherland. Let's say instead that bowling to Smith in 2019 is like giving advice to Donald Trump, or a warning to Xi Jinping, or a comb to Boris Johnson. I've got a line for Scott Morrison, too, but I have to get back into the country.