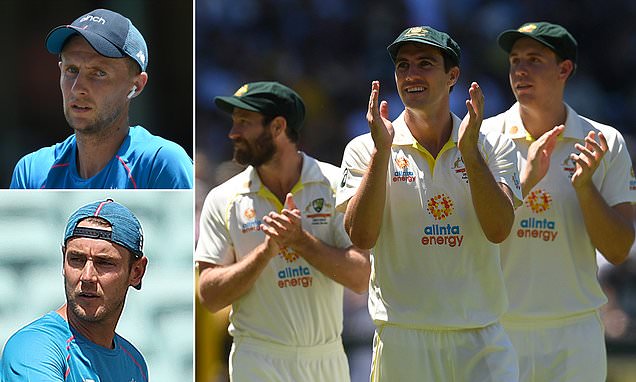 Ashes, Fourth Test Day One LIVE: England playing for pride as they look to earn first win of the series in Sydney following three dismal defeats by Australia… as Stuart Broad comes in for Ollie Robinson in tourists’ only change

England have nothing but pride to play for as they look to earn their first Test victory of the Ashes series in Sydney.

Australia’s triumphs in Brisbane, Adelaide and Melbourne have seen them take an unassailable 3-0 lead in the five-match series, ensuring the urn will remain with Pat Cummins’ men until 2023.

England skipper Joe Root insists he has been ‘hurt deeply’ by his side’s performances Down Under, but they will now look to erase the prospect of a whitewash at the SCG, with Stuart Broad replacing Ollie Robinson.

Follow Sportsmail’s JACK BEZANTS for live coverage as the fourth Ashes Test gets underway, including build-up and over-by-over updates.

A reminder, as we await the toss, that Joe Root sets a new record today – taking charge of his 60th Test match as England captain and overtaking Alastair Cook’s record of 59. It has been a hard tour for Root, and anyone connected with England, but it’s a phenomenal feat from the batsman.

Both the toss and the start of the fourth Ashes Test have been delayed by half an hour because of the Sydney rain. There are still plenty of clouds lurking, but for the moment the sun is threatening to poke through and the groundstaff are clearing up. All of which gives us a chance to concentrate on events at Mount Maunganui, where Bangladesh need 40 to beat New Zealand. Astonishing stuff!

News just in that it’s a 30 minute delay before the toss is carried out but we should be well on the way to a full day’s play by then – the players are out on the pitch warming up so there’s little suggestion or fear that things will be delayed even further.

Some er.. incremental weather, let’s say in Sydney could marginally delay us here. The covers had to come out, they are just being taken off though so if the toss isn’t in next five minutes, it shouldn’t be very far behind.

Back for the fourth Test, with the series all over. Joe Root’s men are playing for pride now and we all know how they need it given how the first three encounters with Australia have gone.

Toss is coming up very shortly. a little over five minutes.

January 4, 2022 Сricket Comments Off on Australia vs England – Ashes: Live updates from Day 1 of the 4th Test
NFL News