Manchester: Australia are closing in on the urn for the second time in as many weeks after Pat Cummins rocked England's top order with a devastating burst with the new ball, leaving the hosts needing another miracle to save the Ashes. 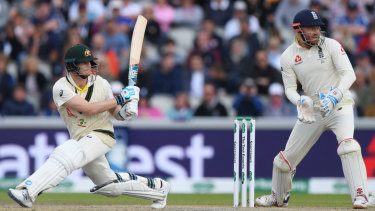 Cummins produced a near unplayable delivery first up to the England captain, whose defences were breached by a ball which moved away off the seam and clipped the top of his off stump.

Ben Stokes still awaits Australia but this challenge might be one bridge too far, even for England's miracle worker at Headingley.

"It probably gives the rest of the guys belief, that if one guy can do it someone else can do it as well," England coach Trevor Bayliss said. "We've already spoken about who is going to put their hand up and be the hero tomorrow. We know it is going to be hard work, but we're going out there with the aim to do that."

Paine's decision to give the new ball to Cummins, who bowled first change in the first innings, paid immediate dividends with two wickets in as many balls in the first over.

The world's No.1 bowler drew a false shot from Rory Burns, who was caught at mid-off from a leading edge, then pocketed the big wicket of Root. 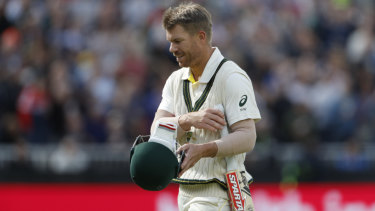 Marcus Harris and Travis Head are also short of runs but Australia are not well placed to make changes. Two of the three batsmen waiting on the bench, Cameron Bancroft and Usman Khawaja, have already been dropped.

Smith again masked Australia's deficiencies with the bat after they lost a flurry of wickets to a fired-up Broad and Archer, the latter cranking his pace up to nearly 149 km/h after a subdued first innings.

Despite Broad's dominance of him, Warner took strike first but failed to see out the over. Beaten on the fifth ball, he was trapped plumb in front the next delivery. "That's salmon," Warner said to Marcus Harris in the vain hope his opening partner would disagree and advise him challenge. That is "salmon trout", rhyming slang for out.

Harris joined him in the pavilion shortly after when he too was given out lbw, except he burned a review on his way back.

Labuschagne's run of four consecutive half-centuries ended after a rejuventated Archer crashed a straight one into his pads.

Head fought fire with fire but his ability did not match his ambition, his middle stump knocked out of the ground by Archer when he was on 12. It was the sixth time in eight innings this series that the left-hander has been outbowled or lbw.

During their first innings, England's middle order also had troubles against the new ball as Starc returned among the wickets, collecting the key scalp of Stokes, who was caught at second slip by Smith for 26.

Starc, playing in his first game of the series, had earlier curved an in-swinger through the big gap between Jonny Bairstow's pad and bat. The left-armer finished with the figures of 3-80. 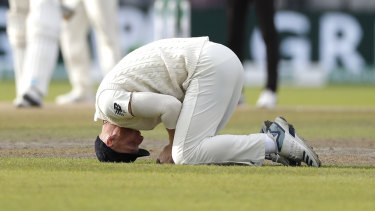