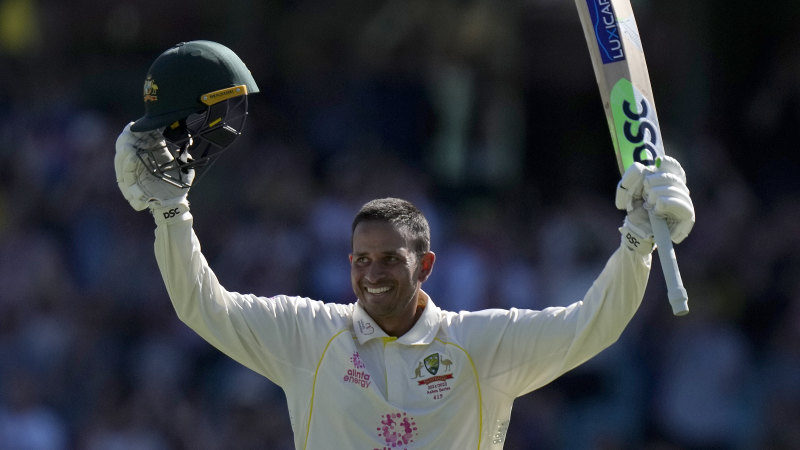 With another sweet pull shot, Usman Khawaja became the third man, after Doug Walters and Ricky Ponting, to score twin centuries in a Test match at the SCG. Khawaja said a quiet prayer and planned a less bibulous celebration than his predecessors. You can find a blancmange of words about cultural change on Cricket Australia’s website, or you can just watch Khawaja do his thing.

His prayer was to give thanks, he told a camera that soon joined him on the field. But Khawaja could be forgiven for adding a word or two of petitioning. Unlike Walters or Ponting, Khawaja had to produce his twin tons on a Test recall, after two-and-a-half years in the wilderness, and with the expectation that he would not be chosen to play next week. He told the camera he was staying in the moment. Given the context of the performance, what else is there?

Khawaja not playing in the fifth Test in Hobart was already an absurd proposition after his first-innings hundred on Thursday, a grittier task than his free-flowing follow-up on Saturday. The second innings required some correct defence early on an up-and-down pitch, at a stage of the match when Australia’s position was not entirely secure. After he managed his way through that period, Khawaja put on a circus that Cameron Green ran away from his insecurities to join.

This was another impressive aspect of Khawaja’s on-ground leadership: he managed to calm his nervy young partner and ease Green into the frame of mind where he could unfurl some booming pull shots of his own. Both batters, recognising this was not a wicket for easy driving, waited and feasted on the short ball. Their partnership wasn’t just skilled, it was smart. Green grew visibly in Khawaja’s company. For all that Khawaja, at 34, is disadvantaged at the selection table by being a player with more past than future, his mentorship of Green showed how his on-field experience will also yield a pay-off in years to come.

Most of us in our armchairs would not make good selectors. Depending on our mood or temperament, we would probably end up with teams of either too many (they’re all worthy) or too few (they’re all hopeless) players.

Right now, Australia are embarrassed by not riches exactly but permutations, possibilities and proprieties. It would be unjust to leave out Travis Head after he produced a tone-setting hundred in Brisbane only to miss this match because of COVID. It would be unwise to leave out Green, who promises so much and is already delivering with the ball. And it would be an unhappy Justin Langer who omits Marcus Harris, a specialist opener in the coach’s own image, whose trajectory in this series, bit by bit, has been upwards. Just a week ago, he was the team’s highest scorer on a hostile pitch in Melbourne. 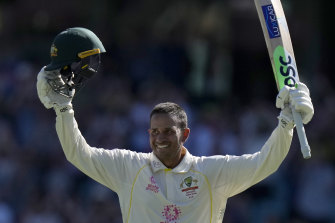 Usman Khawaja celebrates his second century in the SCG Test.Credit:AP

On the other hand, Khawaja is better than all of them, and that ought to be that. No discussion needed. If a player is only as good as his last performance, Khawaja would be the first man picked. If the selectors leave Khawaja out, they will be as welcome in Hobart as an unvaccinated tennis player. You never know – in these uncertain times, it’s always possible that the virus will step in and save everyone the awkwardness.

While Australia were lolling about in their wealth of options, England were battling to muster up 11 capable players. After their heartening performance on Friday, bits were falling off the England wagon by Saturday afternoon.

Jonny Bairstow was only able to celebrate his brilliant first-innings century with painkillers, a blow to the hand keeping him off the field. Jos Buttler was absent due to a suspected broken hand, and when Ben Stokes wasn’t wincing he was grimacing. Bowling was out of the question.

Australia showed no mercy to the England bowlers but Joe Root did. He didn’t bother putting James Anderson or Stuart Broad to work as Khawaja and Green got going. Instead, we had the startling sight of Root bowling a bouncer at Khawaja, with the ball gloved quite expertly by Ollie Pope. There’s a trivia question in waiting.

Even the fickle Sydney weather has not been hospitable to England. Thunderstorms were supposed to give them a washout rather than a whitewash, but most of the rain this week has fallen after dark. Atmospheric conditions have given the pitch more bounce and movement before lunch, and Sunday morning will do much to settle the issue here.

Maybe the Englishmen should get up early, go to church and say a few prayers of their own.