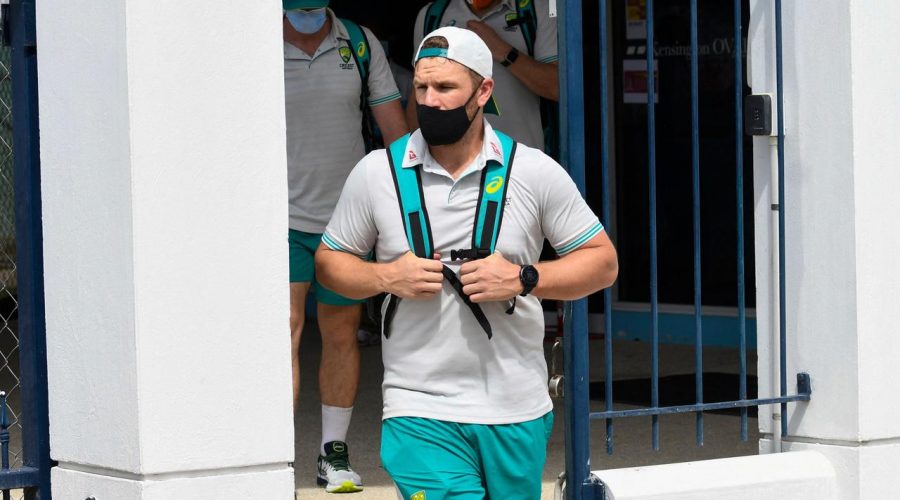 The second ODI was abandoned before the match and all members of the touring party were rushed into in-room isolation at their hotel, leaving the remaining two games in doubt.

Confirmation of the positive case came only minutes before the first ball was to be bowled in the second game at the Kensington Oval on Friday morning.

Players, support staff and match officials were given the news shortly after the toss, with both teams immediately making their way back into their respective dressing rooms.

The two teams were then bussed back to their hotel, with both teams and broadcast staff all staying at the same venue in what’s supposed to be a biosecure bubble.

Everyone inside that bubble has been placed into isolation and will be retested later on Friday.

Cricket Australia confirmed the Aussies were isolating and was not making further comment.

Cricket West Indies chief executive Johnny Grave said there was no decision yet on the rest of the tour.

“This decision was taken after the toss at Kensington Oval once the (positive COVID-19 test) result was known and confirmed by (Barbados) Ministry of Health officials,”

“Everyone will be retested later today. In the meantime everyone will remain in isolation in their rooms until those PCR test results are confirmed.

“We’ll make a further decision on when the match can be replayed at a later date once all the test results are back in by hopefully tomorrow (Friday) morning.”

The major concern for the tour comes because both teams, as well as broadcast personnel and match officials, have been in a biosecure bubble for the five-T20, three-ODI series being played in the Caribbean.

They have stayed on separate floors of the hotels in both Saint Lucia and Barbados, but all personnel inside the bubble travelled on the same charter plane from Saint Lucia, where the T20 series was played, to Barbados on Saturday.

Barbados has reported 50 new cases of the virus over the past three days, with 173 people in isolation. There have been 4319 cases since the start of the pandemic and the overall death toll stands at 48.

Australia remains scheduled to play the Windies in a third ODI on Saturday, but the positive case has put the rest of the tour in doubt.

The Aussies are scheduled to fly to Bangladesh, which remains a Covid hotspot, next week for five T20s, but that could also be reconsidered.

It is the first time the virus has infiltrated the bubble of a series involving Australia.

The men’s team have previously toured the United Kingdom and New Zealand without incident, while they also successfully hosted India last summer.