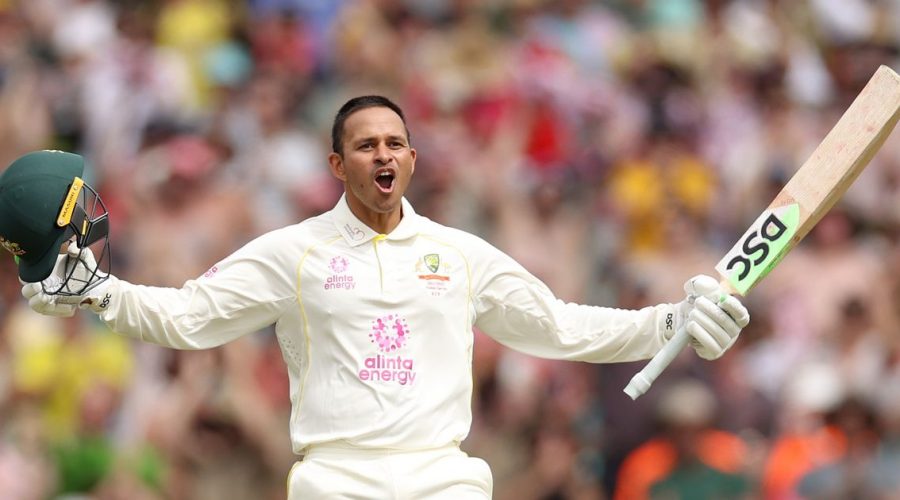 Usman Khawaja scored a magnificent century on his return to Test cricket to put Australia in the driving seat on day two of the fourth Ashes Test in Sydney.

The 35-year-old began the day on four not out and enjoyed a 115-run partnership with Steve Smith, with the pair driving Australia to 232-3 before Smith became the first wicket to fall.

Stuart Broad made the breakthrough for England with the second new ball, getting the Australian vice-captain caught behind for 67.

Smith had looked in ominous form on his way to a 33rd Test half-century, but he did not look comfortable against the new ball, surviving an LBW review in the same over he was dismissed.

All-rounder Cameron Green's struggles with the bat continued this series as he also fell to Broad, getting caught by Zak Crawley for just five.

Joe Root then picked up the wicket of Alex Carey for 13, getting him caught at mid-on after a misjudged swipe across the line.

With wickets falling regularly at the other end, Khawaja continued to cash in after getting dropped on 28.

He brought up his hundred with a whip past square leg for three and celebrated animatedly in front of the Sydney crowd.

Khawaja eventually fell for 137, with his dismissal bringing up Broad's second five-wicket haul in Australia.

Pat Cummins, Mitchell Starc and Nathan Lyon all added some useful lower order runs to push Australia up to a first innings total of 416 before they declared.

In response, England had to negotiate a tricky 20-minute period and, they managed to reach the close of play on 13-0.

Crawley looked to have fallen for a duck, getting caught at slip off Starc, but he was given a reprieve after replays showed the delivery was a no-ball.

Here are five talking points from the day's play.

Recalled to the side for the first time in over two years after Travis Head tested positive for coronavirus, Khawaja made 137 on his home ground in Sydney.

He was given a life when he was dropped by Root off Leach on 28, but the 35-year-old cashed in on his opportunity to make his ninth Test century.

"He showed patience to get his innings going and then how good against spin he is since.

"He was under pressure coming into the side after two and a half years out. He has given the Australian selectors even more headaches."

England too defensive with Leach

After admitting he set "slightly too aggressive" fields for Leach when the spinner conceded 102 runs off 13 overs in the first Test at the Gabba, Root was criticised for being too defensive in Sydney.

Speaking on Fox Cricket, Shane Warne said: "I’m all for the spinner having a bit of an in-out field to start with, but not four.

"Have one or two out there to give you a bit of protection if you drag one down or over-pitch a little, but you can’t let batsmen have easy singles straight away. You just can’t do that. How are you building up any pressure whatsoever?"

"Both men back at long-on and long-off and deep cover giving an easy single. You want to create pressure as a spin bowler."

Part-time leg-spinner Dawid Malan was notably given a more attacking field than Leach when he was brought on for two overs before the lunch break.

Ben Stokes was forced off the field midway through an over with a side injury that could spell the end of his bowling exploits on this tour.

Stokes was in the middle of a sustained spell of short-pitched bowling, but pulled up clutching his side with one ball left in his 14th over.

The 30-year-old then left the field without completing the over, with Mark Wood bowling the final ball.

Stokes did return to the field after lunch, with the ECB confirming that he was being treated for tightness in his left side and that he would not be bowling for the rest of the day.

After publicly admitting his frustration at only playing in one of the first three Tests, Broad picked up his second five-fer in Australia as he offered a timely reminder of his quality.

Having picked up the wicket of David Warner for a record 13th time on day one, Broad added four more wickets on day two to end with figures of 5-101.

He bowled beautifully with the second new ball, taking 2-19 in six overs as he dismissed Smith for 67 and Green for five.

"What a spell this is from @StuartBroad8!!" tweeted Vaughan. "Showing once again what a character he is and how England got it totally wrong in Brisbane .. !!"

Broad returned in the final session to complete his five wicket haul, getting Cummins caught behind for 24 and sending Khawaja packing for 137.

Green's struggles with the bat continue

The 22-year-old is clearly a prospect Australia feel is worth investing in, but he is yet to make a significant contribution as a batter in this series.

With the ball, Green has been impressive, picking up seven wickets and finding particular success against Root, with his height and pace posing some difficult questions.

However, after getting caught at slip off Broad for just five in this Test, Green now averages just 14.25 with the bat.

Speaking on BBC Test Match Special, former Australia captain Ian Chappell said: "Cameron Green has to cement the number six position as a batter and he hasn't done that yet.

"He'll get plenty of opportunity though because he's playing in a winning side and doing well with the ball. But the reason that Mitch Marsh couldn't pin the position down was because of his batting."